Full disclosure: I wasn’t watching TV last night. I was sitting in the garden with a glass of cider and a pizza, watching swallows eat mosquitos and cheering them on. I had surly thoughts about those swallows when Rob Bishop mailed me this morning to remind me I’d missed an epochal TV event: the Gadget Show, on the UK’s Channel 5, described the Pi as the “…most important and revolutionary piece of tech created in this country, this century.” And then went on to use it to power an ice cream machine they made from bits of laser-cut plywood and a collection of nuts and bolts in the studio, which is exactly what we think you should do with important and revolutionary technology in this sort of weather. Damn you, mosquitos. Happily, the video from last night’s show is available online, so it turns out that my evening watching the massacre of the mosquitos wasn’t wasted. The video can’t be embedded, but it’s definitely worth five minutes of your time: click here or on the picture to view. It seems the video isn’t available online outside the UK, but if you’re curious and you’re not in Blighty, you should be able to google for a UK public proxy.

What you’re not told on the video or on Channel 5’s associated page is how Rob Bishop stepped in at the last minute, when the Gadget Show’s engineer was sick, to complete the programming for the ice cream maker, giving up a weekend (which he spent working in a Cambridge cafe known for its superior wi-fi offering) to get the tech in place for the segment in time. I salute you, Rob, and I owe you an ice cream. All that code you see in the clip? Prepared by Rob’s fair (actually, quite tanned, now he’s been on holiday) hands. There’s also a PiFace breakout board in there, via which the Pi controls the LEDS and the solenoid that opens and closes the whippyscoopy* valve.

Turns out that the motion-activated dispenser and ripplicating* device driven by the Pi worked a treat. Congratulations, Rob. Any disastrous failures you might see in the video are entirely down to a failure to plan how might you get dry ice into a small opening without a funnel, and not Rob’s cool-as-ice coding. Enjoy the video (it’s a hoot), and let us know what you think below. No, I wouldn’t eat one either.

*These are technical ice cream terms that I just made up. 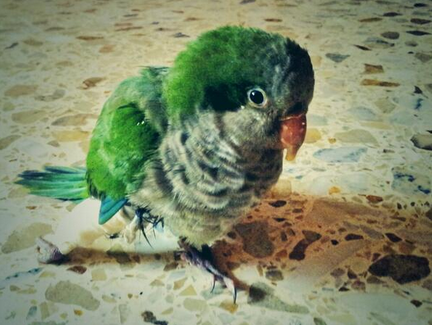 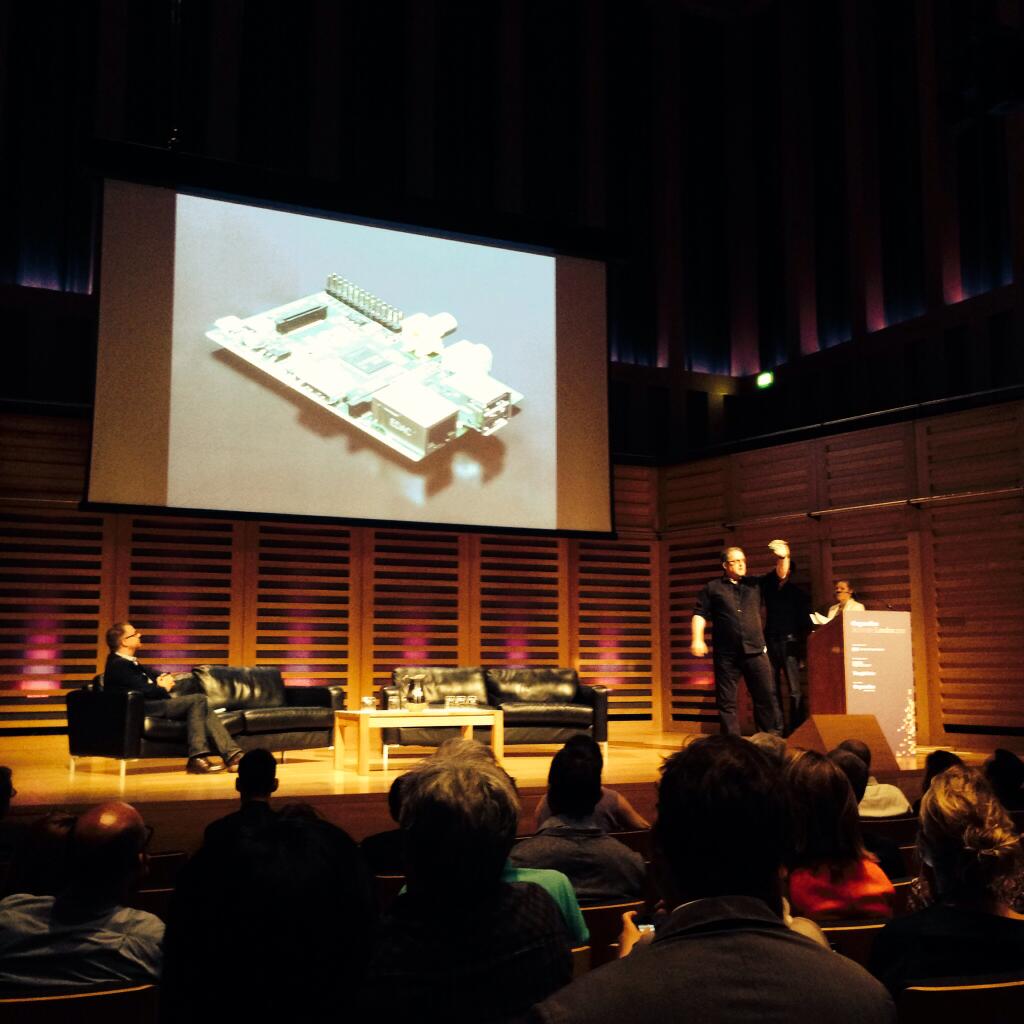 UK only I guess?

Seems that way. I’ve just added a note to suggest that people look for a UK public proxy if they’re really keen to view it from outside the UK.

Awesome news post! After 20 proxy tries, I had to give up on watching the video though :(

If someone finds a solution, please reply here.

Seeing practical uses for Pi is always great, but sorry Liz “you should be able to google for a UK public proxy” is such an annoyingly unthinking throwaway remark. I did exactly that, found lots of sites and my virus checker blocked every single one of them. I do wonder if Trend Micro actually had their collective arms twisted into blocking proxies with misleading comments about malware downloads. Big Brother is not only watching you, he’s controlling you. Thought this kind of thing only happened in China and Iran? Think again. Why isn’t Edward Snowden being hailed as a hero instead of being persecuted? Sigh. Rant over.

Oh come on. It’s not Liz’s job to tell you how to circumvent IP licensing laws/rules/conventions – regardless of moral/ethical/legal issues.

I used my own UK based web server (no, sorry – you can’t have access to that). But there are other services out there. The free ones are mostly pretty crap though. I have used OpenVPN & identity cloaker successfully in the past.

Hope that helps a bit.

(This is in response to Alex, whose post lacks a “Comment” link). No, of course it’s not Liz’s job to tell me how to circumvent such things, and I can’t imagine why you think I might suppose it is. But it is ironic that, given that she herself says that waiting three weeks for The Daily Show drives her nuts, she tosses in a throw-away remark about how easy she expects it to be to find a proxy. We’re all in the same kind of boat.

Obviously I don’t blame anyone but the content providers, but it makes no financial sense to block worldwide access. People who can view it don’t have to pay, so what’s the point of blocking anyone? We all get to suffer the pointless web ads just the same.

Well, I actually *do* use a proxy; not telling you where it is, though. ;)

That should be banned throughout the globe. It actually is, but some western countries, like UK and USA still think they own anything that’s being made public in their countries…

Drives me nuts. There’s a lot of content from both sides of the pond that excludes viewers in other countries. The one that really gets me is The Daily Show, which I love. We have to wait three weeks for it to appear on UK TV, at which point it’s The Three Weeks Ago Show, leaving it lacking a certain something.

RE watching the daily show, try a firefox plugin called Media Hint, works very well. Not sure if it will allow outside UK to watch raspberry pi’s on channel 5 … but it might do

He wasn’t lying. It’s very easy if you get someone else to do it. :)

Val said “and here’s one I made earlier”. In her case you could believe that she had actually done it.

It does work internationally if you use a proxy. They made a right hash of that didn’t they? Well at least they were good enough to say the Pi performed well. Nice one Rob.

Glad they said the Raspberry Pi bit when well.

I wonder if The Gadget Show would be up for a regular Raspberry Pi project segment. There are a fair few out there already so it would just be a matter of dropping them in.

More publicity for the Pi. Brilliant? How many units have been made/shipped now in total, I wonder.

A million and a half, so far.

well with no sign of stopping i hope gadget show do carry on with raspberry pi stuff,i only have liked them on facebook for info about new phones.

They have a funny idea of where the HDMI port is too!

So the MKII version adds a temperature probe in the pre-gloop; linked to an overhead hopper of dry ice and a pi controlled chute…

The electronics/RPi stuff may be cool but the core technology really sucked.

They only discovered that it didn’t work when in the field, even though it was obvious on sight that it couldn’t.

Yes, using dry ice is a quick and portable way to get the heat removal, but you still have to design a proper feed mechanism. Really it’s a bit like coaling a boiler, which Victorians sorted.

For the delivery mechanism: dismantle a Mr Whippy van and have a look.

I was able to watch it in Ireland – very funny. It was hilarious to give a quick glimpse of miles of indented code and then add in a line and say: “See? That’s how easy it is!” Well done Rob anyway
A little more research on how ice cream cone makers work would have helped!

Now that is cool…

And now, standing on the shoulders of giants, I will – oh wait, IIIImmmm ssiiinnkkiinngggg!

Ah, they gave the presenter a little bit of code to type: time.sleep(10). “That is literally all it takes to program this machine”. Bless.

Rob says he actually deleted it from what Rob had sent, then typed it back in on camera…

That was the most important part of the piece. Thirty years ago the BBC put on the “computer programme”. I saw a show like this one ( 19 minutes in ) and saw that programming a computer was not some dark art as it was portrayed at the time but accessible to anyone. I will gaurantee those few seconds will have grabbed many kids attention, I got a ZX81, they may get Raspberry Pis.

Ok, but will it blend?

Some time in 1980 (Aug 13, actually) we were given by my American relatives an Ice Cream Machine
No automation, just a bucket with motor (110V – doh)
Used once, drank the non-ice cream. It’s lived in the loft since.

Check with electrical safety regs, but you could run it from a yellow brick.

Not a yellow cake, though. Safety regs don’t cover that.

You’re a quirky one.

Not the adjective people use most frequently (that’d be “sweary”).

All the “Stories like this” in the sidebox on the video page are talking about the ice cream version of android, lol.

At Bletchley Park the exhibition says the machine to decrypt Enigma was also named after an ice-cream. “Bombe”. Nothing new.

no one here from USA who can help to upload this video on youtube?

can some one in the uk just rip the video off the site and upload to youtube or some other site?

if on firefox the addon downloadhelper will prolly do it

or maybe host a torrent of the video

Great segment. I was able to watch the video from the U.S. by selecting London as the termination point for my vpn service. (ProXPN). This is just one reason I think some form of front-end vpn service will become standard for most people in the near future.

The ice cream machine was hilarious – they absolutely captured the maker spirit — if at first you don’t succeed — and the Pi did its job. Kudos!

download firefox go to options the go to advanced by connections click on settings then manual proxy configurations enter 88.150.178.172 in socks host leave it on socks 5. in port enter port 1080. and enjoy. thank me later guys lol haha

Thanks a lot, it is working!

You sir, are my hero. Many thanks from a yank.

Am I the only one who was sorely disappointed that the power of the Pi was only used to move a lever back and forth? I mean I have an 8bit ATMEGA running my 3D printer and that is only running at 16MHz!

I would have loved to see the Pi controlling the feed motor, dry ice & ice-cream temps, add dry ice as needed, small LCD Screen to show all the information etc.

Shame the TV producers didn’t allow for more time to really demonstrate what the Pi is capable of.

It’s good that RPi was shown off to a new public, but this show is mostly for gadget consumers, i.e. the sort of people who buy sealed units (xbox, ipad, silly bicycles, … ).

As you say: the auto valve is ancient technology that could have been done by any student back in the 1960/70s. Why do you need a whole computer when just a venerable 741 would do the job? “Brain the size of a planet, …”.

Has the producers bothered to ask a few RPi people to design the thing; we would have come up with a much better design. a) the refrigeration would work, b) the RPi would show its stuff.

It’s a shame not more functionality could not be provided by the RPi, but knowing TV it was a last minute request. There are so many enthusiastic people supporting the RPi, is there any future opportunity to show a more complex and enhanced project with RPi on the gadget show in the future? I am sure you would get the help & support from the many RPi followers.

Such a shame that a show like this could not do the basic testing prior to going live that any decent programmer or hacker should do!