We’ve had loads of questions about the upcoming Minecraft: Pi Edition over the last couple of days. We sent Daniel Bates, one of the University of Cambridge PhD candidates who volunteers for Raspberry Pi, to Disneyland Paris to join Mojang for their announcement at MineCon on Saturday. He got back yesterday with some video and more details about what you’re going to see when a download’s available. Over to Daniel!

What do you get when you combine Mickey Mouse, some game developers from Sweden, and an inexpensive educational computer? Good news all around! I was at MineCon in Disneyland Paris this weekend where we unveiled an early version of Minecraft: Pi Edition.

This new version is based on the Pocket Edition of Minecraft, which you may have seen running on mobile phones and tablets, but has one key difference: you can program it. All you have to do is set up a network connection to the running game, and then you can send text commands to control the world. This makes is possible to program in any language which supports network connections, and you can access the game from any computer which is connected to the Pi. One possible setup is to have a Python prompt and the Minecraft window side-by-side on the Pi.

Minecraft: Pi Edition has been in development for less than a week, but already Daniel and Aron from Mojang have got it running really smoothly. It runs on all versions of the Raspberry Pi with no overclocking necessary. Liz interjects: Daniel F from Mojang emailed me yesterday to say they’re seeing 40fps with a 256MB Pi, although the development work was done on a set of 512MB boards. (They say they want to optimise it more, but I couldn’t detect any slowness in my time with the game.) There’s currently the ability to place any block at any location, ask what type of block is at any location, and keep track of events such as player movements, with more features planned.

We see this as a very exciting way of drawing children into programming. The game can be played with no programming at all. Then, basic programming can be used to place large numbers of blocks in particular patterns to speed up the building process – the audience burst into applause when Daniel wrote a simple loop which simultaneously changed the position and type of blocks being placed, which soon resulted in lava cascading from mid-air and setting fire to the wood below. The more creative programmer will only be limited by their imagination. Want to build a digital clock into the wall of your house which displays the real time? Easy. Want to get back at a friend who stole your precious diamonds? Remove the floor from underneath their feet and let them fall into a pit of lava. The possibilities are endless.

The goal is to release Minecraft: Pi Edition before the end of the year, free of charge. We hope that this will further advance the Raspberry Pi’s aims of getting children excited about computing. 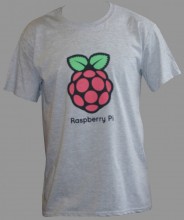 New T-shirts (and women's and kids' sizes) - get them before Christmas! 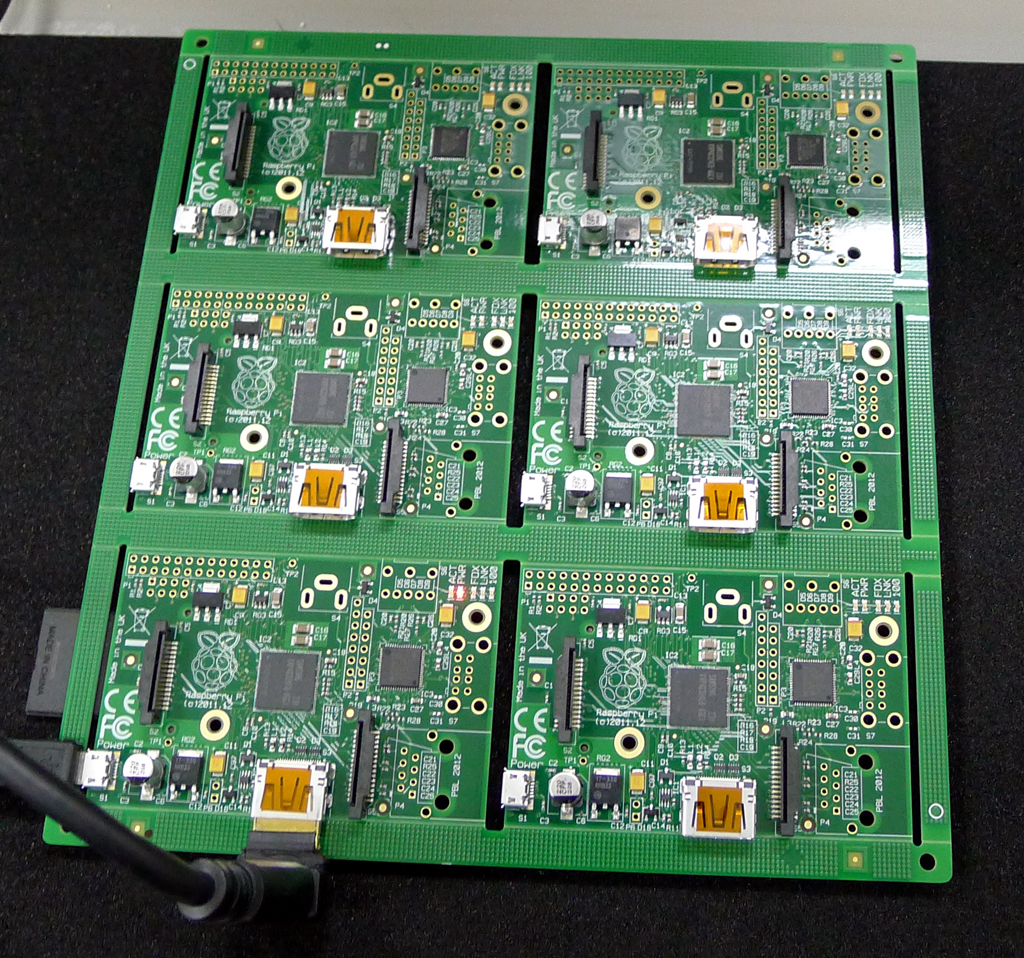 Sony, the Pi makers - a post from Pete Lomas

Just the name I was thinking of! Mojang? Anyone listening?

Wow. I still can’t believe this is happening! :)

I wonder if it is possible to run it full screen without an X desktop.

There’s no reason why not, but this very early version is limited to window mode.

will we be able to play online with normal servers ?

Unlikely – Pocket Edition and regular Minecraft are very different. Pocket Edition does support some form of multiplayer, but it’s too early to say whether it will make it through to the Pi Edition.

Personally, I think that a shared space in which multiple people can program collaboratively is a must-have.

However, there will be scope for adding this sort of functionality to the regular game using a mod.

so if people can create mods for it, does that mean peopel can make a mod so it can connect to a normal server ?(if they also adjust the server a bit)

Sorry, I should have been clearer: you can create mods for the normal Minecraft, but it’s not as easy to mod the Pocket or Pi versions.

I don’t know enough about the internals of the two games to be sure, but I would guess that what you describe is theoretically possible, but not worth doing because it would be so much work and performance would suffer.

Yes you could hack one up, BUT it would take time and ether you would have to down grade the PC version, or upgrade Minecraft: Pi edition (PiCraft) up to the current version with compatibility and same blocks with same ids, which would be an issue if you re-scripted Minecraft in something other than Java…

One could write a program that would read blocks on a normal server, and copy them into Minecraft:pi, though minecraft pocket’s maps are limited, so one could reach the edge of the map. One possible solution would be to teleport the player to the center and move all blocks like a conveyor-belt. We will have to wait until its released to see what plugins people write.

I thougth there was no OpenGL(ES) support in the X server (i.e. you can only run it fullscreen or as an overlay), but this game is running in windowed mode. Is it just a blank window with an overlay on top of it, or is it actually integrated into the X server? The difference would only be visible if you put another window on top of the minecraft window, so it’s not a huge issue, but I would like to know how this works :).

They’ve actually been rather clever; we offered some help with Open GL ES and wrote to them wondering about rasterization, but Mojang wrote back saying:

>>> No it’s not software rasterized. We check where the window is and then
>>> track the position of the output. When you move the window we recreate the
>>> egl-context. So the screen goes black for a split second, but it was the
>>> best solution we could come up with without diving very deep into X.

I want to know if Raspberry pi will be produced in Brazil. Sorry for bad english.

I don’t know about produced (as in manufactured) but they certainly would ship there as far as I know.

wow this makes me want a pi so much. are the shipping estimates to the uk still 6 weeks or something

No. It’s worth shopping around a bit.

Element 14 is your friend!

This is getting better and better by the day! I’m actually so excited about this!

Sounds interesting but WHERE do you buy it??

It’ll be free, and it’ll be available as a download from this site when it’s ready.

Depends on where you live. In the US Newark.com (a part of element 14) has been my friend. Ordered 2 more on the 15th of Nov and they shipped today Nov 27, with delivery on Thursday. The website will tell you when the next shipment is expected and rough estimate on how many. Wait times on the Farnell site (US version of RS online ) are posted as 6-12 weeks.

3rd party sites have them for sale at a premium.

The US version of RS is actually Allied; Newark is the US subsidiary of Farnell. (Confuses the hell out of me, too.)

Our experience has been that Farnell/Newark’s lead times tend to read very long, but in practice are much shorter. YMMV.

Added to Allied ‘waiting list’ on 3/29… Received ‘invitation to order’ on 7/2…. Confirmation of order 7/4…. Finally get an email that my PI should ‘ship no later than December 21st’. I ordered another one from Newark.com received it a couple of months ago. Based on that service level I would not place another order with Allied.

This is “THE BEST” thing ever – MinesPi!!!!
Just this weekend, as a family, we were trying to build a dome of glass on XBOX version, but within seconds (with the power of Python), a stone one appears.
This is exactly the spark to get kids on the programming path.
Collectively, could you be awarded a Nobel prize???!!!!
(As you can probably tell, I am quite excited…)

Bravo, that minecraft guy. This is awesome!

What is an X desktop or X server?

Oh By the way, Great job to Mojang AB and Raspberry pi foundation!

unlikely, pocket does’t have it, and Pi is even less powerful.

This is epic we just got a hd screen . Can you play it fullscreen

Will this support lua? As in if the Lua5 package is installed, add a lua library.

Absolutely. Any language capable of communicating over the network will work.

Thanks. I’ll just have to wait for someone to write an API for it…

Can i download the raspberry pi minecraft? And when yes, where? Google knows absolutely nothing… :-(

Wow! I want one of these!

Any word on MineCraft? Ordered my son a raspi for Christmas and he is obsessed with the game. We have the youtube issue covered but minecraft would seal the deal! He’s six…lol

Is it available now or soon? I saw it was supposed to be released by the end of the year.

That’s exactly what I was wondering … wasn’t this supposed to be released by now?

Scripting the block placement was the one feature that makes the Pi edition attractive for my son. However, just today I found the ScriptCraft plugin so perhaps I’ll grab that instead. The Pi will just stay in a shoebox (where it unfortunately sits for now.)

Apparently there were some nasty bugs that needed fixing, so that the reason for the delay. Better to have it late but working…