The Bay Area Maker Faire is the big daddy of all the Maker Faires, and boy, do my feet hurt after two days running up and down its exhibition halls and fairgrounds. Eben did two presentations on stage (both have been videoed, and we’ll make them available when the editing guys have done their magic); we spoke to a kajillion or so members of the press and recorded some podcasts (links to come) and video (ditto) interviews, and we met a lot of friends old and new from the Raspberry Pi forums – it’s been particularly good to put faces to names like SeanD, Bakul, Simon Monk and Jim Manley. I am missing loads of you out; it was fantastic to meet so many of you.

There are simply no words to describe what a Maker Faire is like. Cross Mad Max with My Little Pony, a flamethrower and a handful of resistors, and you’re part-way there. Here are some pictures. We don’t know what the flaming umbrella thing behind Eben is, but we want one for the office. Motorised cupcakes. These give you a hell of a shock when they sneak up behind you. Liz buys some art. (It’s from unusualcards.com – Francesca also does non-blasphemous subjects. Click the picture to visit her website. This is going in my study.) One of the guys from Dual Core Music asked Eben to rap with him. Remarkably, he did. We surprised Joey Hudy, maker and White House Science Fair honouree, with a Raspberry Pi. Can’t wait to see what he does with it. (In this photo I appear to have spotted something hilarious in the corner of the ceiling. I go to useless bits when there are cameras and microphones around.) …and more interviews. This one’s with Hak5, who have some interesting plans for their Raspberry Pi. Yes, that’s a scrap-metal dragon with a flaming nostril over the interviewer’s shoulder. A rare quiet moment, brainstorming for a panel discussion with Matt, the guys from element14 and Ben Heck, King of the Modders. And I realised a childhood dream. I was, for the six seconds it took to take this picture, the happiest person in the entire Western Hemisphere.

I’ll be linking to a few of the video and print interviews we did over the last few days when they go live. What a weekend! 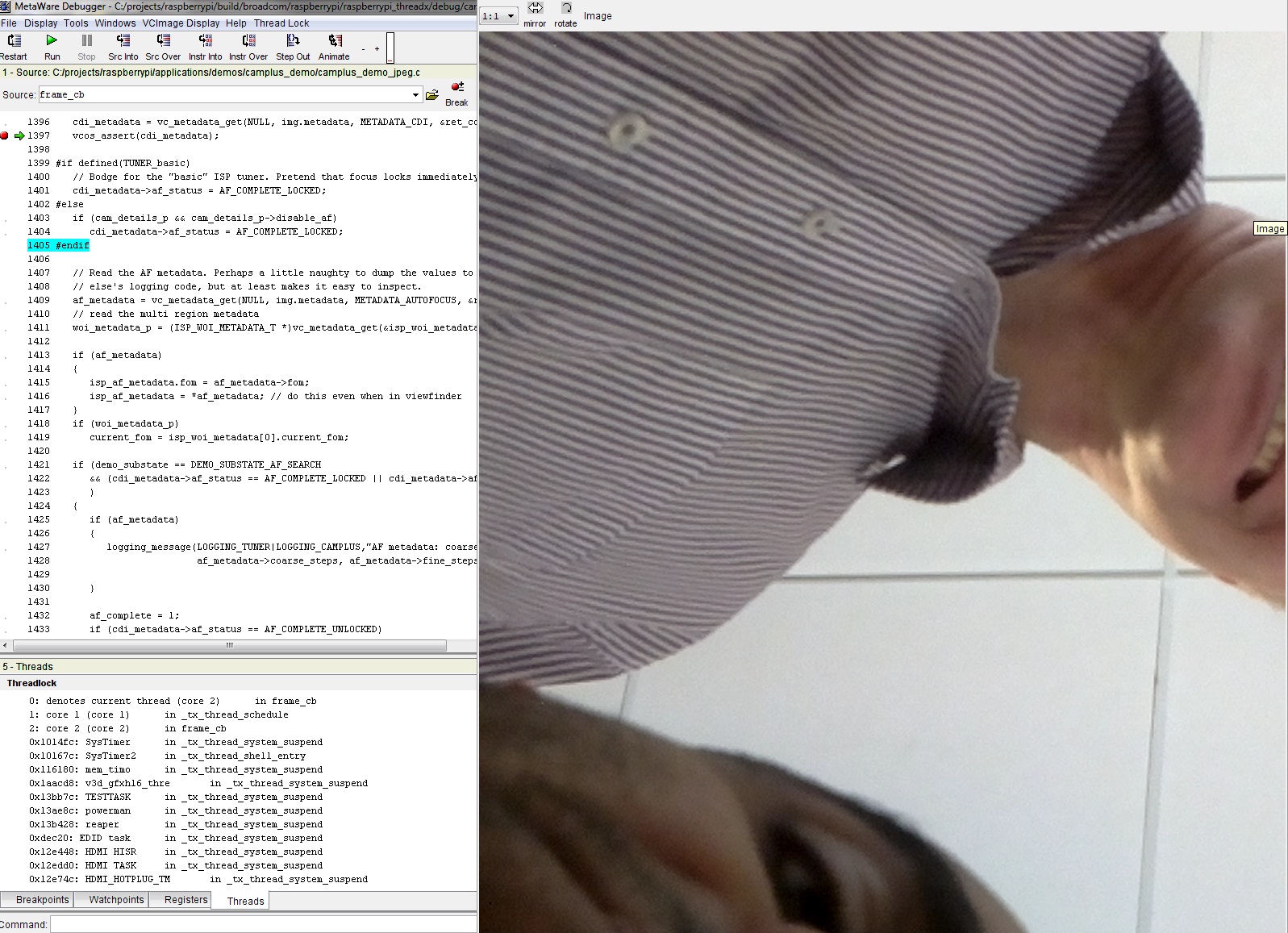 Sorry I missed seeing you folks there in person. Props for the Princess Leia pose!

Greetings from the guy in the brown .gif t-shirt from after the first talk!. It was such a great opportunity for me to meet you two. Thanks for taking the time to talk! Hope you guys come back :D (and maybe next time with a booth and excited bay area volunteers… hint hint :P )

I swear I saw the guy in that picture by the jalapeño poppers stand.

Nice choice of posters, Liz! I’ve been looking for something to spruce up the office with.

Believe me, the hono(u)r of meeting you and Eben was all ours, Liz! It was so inspiring to see how many people crowded into both of the presentations and it’s a whole new level of bragging rights to be one of a handful of people in SillyCon Valley to be able to hold up a Pi in the fiberglass, so to speak, much less one of three people to have one at the entire Faire (with Eben being one of them).

I spent more than half of the weekend doing Faire volunteer work, but, in preparation for next year’s Faire, I want to let everyone know that I’m on the inside of the organization who can help us get resources lined up and to grease the skids. I see absolutely no reason why we can’t have a Raspberry Pi booth with room for the Foundation, user groups, software and hardware partners, etc. Since I also have relationships with engineering people in most of the Valley companies that can potentially be of help to Pi users.

For example, I’m now tied in with the folks at Oracle who are very interested in ensuring the the Pi will be a first-class citizen in having a Java development environment that is not only optimized for the BCM2835 ARM CPU, but, that the GPU is fully integrated with JavaFX graphics, a just-in-time (JIT) compiler, and all of the features coming in Open JDK compliant Java 8 and 9 in the next few years (the current version is Java 7, based on the 1.7 software development kits (SDKs). Oracle also supports many other open-source and free efforts including MySQL, Oracle Express, Alice, Greenfoot, etc. There are many other prospective partners that Eben has been talking to and I’m ready to provide whatever on-the-ground assistance may be needed to make things happen.

CEO of the Computer History Museum, John Hollar (who has been a moving force on the Web side of the BBC and PBS for many years) has given me the green light to promote the Pi by organizing user group meetings through the musuem’s educational programs. CHM is a 501(c)(3) non-profit organization, similar to the Raspberry Pi Foundation and as part of their charter, they are required to provide educational opportunities to the public at no charge, and we now have permission to fulfill that mandate on behalf of Pi users and the public. I’ll provide more details on this as more people receive their boards and, when we have enough of a critical mass, I’ll start scheduling meetings and presentations at the museum this Summer. I’m sure that Eben would be a huge draw for not just the Pi community, but s f thousands of students in technical curricula from advanced placement programs in high schools through graduate school programs at Stanford, Berkeley, San Jose State, and other University of California, California State University, other private and public universities and colleges, and community colleges.

Well, time to get some well-deserved sleep for once. Back to Pi-finity! work tomorrow!

Hi Jim,
That is great news about the efforts to get a JRE on the Pi. I’m a Java developer with 12 years experience + Linux + some ARM skills and would love to get involved if you need any help :)

it would be awesome if the magpi team could go too, may have to start a donation stream or somthing to get to go :)

Why the hell do we still have cars?!

wonder if R2-D2 was powered by a Raspberry…. should be:)

Any reason why Eben is interviewed by Hak5 on a disabled spot ?
I guess maker faires are harder on people than I thought.

Take care, thanks and have a quick recovery.

I don’t like blasphemous subjects, but that “art” might actually be a pretty good representation of the 2nd coming

Indeed there will be much wailing and gnashing of teeth by non-believers. Running and screaming seems to be a logical extension.

I checked the website and the actual title for that card is
“You Can Run, But You Can’t Hide”

Were you saying “Help me Obi Wan Kanobi you’re my only hope” when that photo with R2 was taken?

The Jebus pic is really funny.

Ask Him if He agrees with you..

I believe he was actually quite a humorous chap. If you happen to be a believer, then surely to deny him a sense of humour is to deny his humanity – which was kind of meant to be the whole point.

Speaking as a Christian, many of my fellow church-goers need to figure out where their funny bones went.

Maybe, but his Dad famously wasn’t so light-hearted.

I really enjoy a good joke. But this is not art, it is not funny, it’s silly and stupid because it’s so primitive.

I want a cupcake! And if the hundreds and thousands are real then all the better.

I missed Eben’s talk due to the mad traffic jam around the place and having to park quite a distance away but I made it just in time to briefly talk with you both. It was a pleasure to meet you both and hope we get to meet more of the RPF folks in future Maker faires!

Great t-shirt! I have the same one, only one or two sizes bigger! :)))

I sincerely hope you have the Eben rap thing on video and that you’ll post it anytime soon. Pretty please with loads and loads of sugar on top =o)

I hope you don’t have it, and that if you do you don’t post it. There’s no value in seeing people try to rap, unless they’re actual-factual rappers. Some of my most disturbing memories are of people try to rap when they shouldn’t.

So I’ll take your pretty please with loads and loads of sugar, and raise you a cherry and some sprinkles on top.

Help me Eben wan Kenopi, you’re my only hope

“We don’t know what the flaming umbrella thing behind Eben is, but we want one for the office.”

As one of the creators of that thing, BrollyFlock, our cool factor went way up by having a picture posted on your site. Confession – the makers/artist/hakers that created BrollyFlock love your project. But I fear our artwork might be a bit too large to send over to your office. We find it hard to make anything that fits in less than a 20′ shipping container.

If any of the Pi team are interested and in the area again you have an open invitation to swing by our shop in Oakland, CA.
http://fluxfoundation.org

We’ve made a note of the location – we’ll definitely drop by to see you when we’re next in town! (And we thought BrollyFlock was *brilliant*.)