Meet Miguel Wattson (geddit?), the most piscine member of the Raspberry Pi community. Miguel is an electric eel who lives in a tank at the Tennessee Aquarium; and his keepers, with some help from some computer science interns, have decided to use Miguel’s tendency to generate electricity to do some showboating. Electric eels (actually a kind of knifefish, so strictly speaking they’re electric fish, which sounds much less cool) have the ability to discharge up to 860 volts from three large organs made from electrocytes – organic cells which work like the voltaic pile in an early battery –  which they use to stun prey, to communicate, and to navigate. An electric eel at full power only discharges for a couple of milliseconds, but even so, has the ability to electrocute a full-sized human.

This is all very glamorous and exciting, but the problem for eel watchers is that all of this drama is silent and invisible. There’s no way to tell just from watching whether or not an electric eel is discharging. Happily, there’s a way around that.

Sensors (I’m guessing electrodes in the water, connected to ground, whose resistance can be measured – but I do not have an electric eel to test this setup on – your ideas in the comments please!) in Miguel’s tank detect when he discharges. These signals are sent to a LED light and speaker system in the aquarium, where they make static rapping sounds, and flash lights to demonstrate how frequently Miguel discharges. Here he is, doing his thing at feeding time.

But the aquarium team didn’t stop there. Miguel’s electrical activity also sends a message to the attached Raspberry Pi, telling it to send a tweet. Miguel’s Twitter feed is full of fishy puns, eel facts, and messages about conservation – along with the occasional “POW” and “BUZZ!” A database of tweets is constantly added to by staff at the aquarium (Miguel does not have fingers and consequently finds it hard to type).

“Ironically, the eel code was written in Python,” said Evgeny Vasilyev, one of the computer science interns  from Tennessee Technological University’s Business Media Center. “The project’s main set piece was Raspberry Pi, a low cost computer which provides all of the necessary functionality in a compact package.”

The Pi not only sends the tweets – it acts as a throttle to make sure that Miguel doesn’t start spamming the feed when he gets overexcited. Feeding time, for example, gets Miguel so overstimulated that he discharges more than once a second. The Pi keeps the frequency of tweets down to a reasonable level.

The Chattanooga Times Free Press has some video of the setup:

You can follow Miguel on Twitter at @EelectricMiguel. You’ll notice that he follows Tennessee Aquarium’s pioneering tweeting groundhog (no, we have no idea what a groundhog is doing in an aquarium), @ChattNoogaChuck, whose profile boasts that he is the aquarium’s chief seasonal forecaster.

If you’re following Miguel, keep an eye out on Mondays, Wednesdays and Fridays, when he’s fed, for bursts of activity! 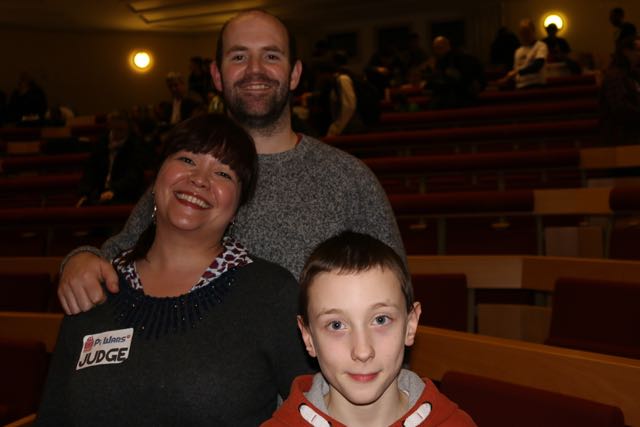 Bracing myself for fish puns. Let minnow when it’s safe to come back. Seriously, though: cool use of Raspberry Pi! I hope I can visit them to see it in person!

You should definitely visit! It’s a brilliant aquarium. One side is oceans & seas, the other is freshwater & rivers.

And somewhere, there’s a groundhog.

i’ve heard it’s a wonderful Plaice. it’s all about the Bass. hopefully these will be the sole puns

I bet Liz was ‘ead over ‘eels over this one when the info hit her inbox :)

When I was little the conga eel tank was one of my favourite parts of the Sealife Centre.

When the moon hits your eye like a big pizza pie, that’s a moray.

I think Miguel ought to have a screen pointed at his tank, so he can sea all the rEel time updates on his twitter page. All the other animals would be well-jel(lyfish).

Wow!
I wonder if it is possible to use this electricity to charge an super-capacitor, which would power the Raspberry Pi. One could use RasPi A+ with WiFi or Ethernet via USB.
I Belive I saw a post somewhere that showed how to turn of HDMI and the entire GPU.

I believe the eel will discharge and light a Neon bulb in old tech.

For a Pi input likely you would use two electrodes on opposite sides and a Mov to start with and a 3.3V? transorb before going to a conditioning circuit. Should be a lovely analogue waveform. I would have no hesitation putting a scope probe behind a Mov, Resistor and Transorb to peek first.

Watt a great idea. Now would it be possible to capture the discharge and use it to actually power the Pi? And Eelectrically powered Pi!

The charge isn’t constant, that would not work. However, maybe if we used something much simpler than the pi…. Hmmmmmm… The minute it receives a charge it sends out a tweet.

The problem with the current setup, is that we do not receive the electric input directly.

I think you would have difficulty with the e-fish-ency.

Is the Pi running at a slow speed or is it over clocked to Turbot?

We did not overclock the raspberry pi.

Since they can use their discharges for communication, how about connecting up a few other electric eel tanks around the world so they tuna in to each others’ comments? If they realised their messages were being breamed to other fish, who knows what they’d carp on about?

Now That! is an idea I like.
A to D to capture the waveform is easy, but how to replicate?

If putting probes into the eel’s tank, don’t damage his fins, otherwise he’ll need the services of an orthopaedic sturgeon…

I’ll have to tell me mate, Barry Monday

You could capture the voltage/current….but after conversion to a lower voltage, only a few watts would exist. You could power a Pi off eel burst for about 3-5seconds. More energy would be wasted than used. Eel power is not plausible unless there were a few dozen discharging every 3-5 seconds every day, all day, all year long.