I am driven to blog from Starbucks today, thanks to lousy public transport and awkwardly timed meetings. I am amazingly caffeinated. So. Kickstarter finally launched its UK offering today, and the very first project to get approved (proof of this rather awesome feat is available here at the Kickstarter blog) has a Raspberry Pi at its heart (we notice that those involved with Raspberry Pi seem to be extremely skilled at hitting F5, hence the excellent positioning of this project at the head of the Kickstarter queue). If you’ve been following the news on this site, you may have noticed that it’s a project that’s being run by some familiar people very close to the Foundation’s hearts. Prototype under development. You may recognise the beardy fella with the hat.

Paul Beech and Jon Williamson run Pimoroni, a company they set up to make the very popular Pibow case. It’s my favourite of the cases out there: I use one myself. It’s now open source and available on Thingiverse, and was acclaimed “the best-looking Raspberry Pi case ever” by Gizmodo. Paul is also the designer of the Raspberry Pi logo. We published a post here about what they’ve been up to over the last few months, in a period where they’ve become employers and business owners on the back of the Pibow, a few weeks ago. They’re both old-school gamers, and they have a plan for a new product, for which they need Kickstarter funding. The Picade is intended to be a very high-quality, hackable, desktop arcade machine. It’ll come in kit form, with a top-notch screen; a good-looking, solid cabinet; a proper arcade joystick; and handsome microswitch controls: all you need to provide is the Raspberry Pi. We love the idea, and we know that Paul and Jon’s attention to detail, finish and quality is exceptional. The Picade’s going to be quite a special piece of kit when it’s done.

At the moment Picade is in prototyping. I’ll leave the nitty gritty to Paul and Jon, who have loads more information about what the project’s all about on their Kickstarter page, and just leave you with their Kickstarter video for now (watch until the end: there are outtakes). What you see in these pictures and video are rough mockups of what the eventual product will look like, once funding has come in.

It’s a brilliant idea, and we are beyond pleased that it’s the very first UK Kickstarter project out there. I’ll be throwing a few quid their way, and I hope you’ll consider it too!

If you’re setting up your own Kickstarter using a Raspberry Pi, please mail us to let us know about it. We’d love to hear what you’re doing. 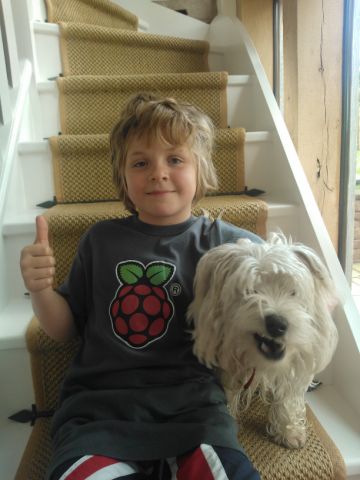 T-shirts - get them while they're hot!

Don’t go to Starbucks, their coffee’s dreadful and they don’t pay corporation tax!

They do, however, have free wifi. :D

As do most places now.

Have you been to Cambridge recently? :(

Some of the pubs do I think. The Bathhouse did last time I was there. I think I heard the Kingston Arms does and I think CB1 and CB2 both do as well.

Got to agree with Liz – wifi in cafes in Cambridge is terrible. Even places like CB2 that billet themselves as internet friendly cafes have barely usable connections

On the theme of retro gaming I’m currently working full time on a series of pinball mods using the Raspberry Pi. First project is the DMD Extender – use an external monitor to display the Dot Matrix Display in real time.

I’m just about to get the interface boards manufactured and get a few prototypes out.

Interesting. Shame I didn’t hear about this before the project was completed, but oh well.

I gave the Kickstarter a brief skim but didn’t see anything mentioned – will this be designed to be able to take a vertically-aligned monitor as needed?

Oh wait, my mistake, it’s not done yet. The phrasing on the article had me a bit confused, haha. My bad!

It would be nice if they had official ROM download section where the money would go back to the original companies if they still exist. Although many have their own emulators on iPad etc, but without buttons they’re really crap to play.
I see they’re not distributing any software with it at all. *cough* copyright *cough*

If they make the kickstarter and make it well (at 30% funding in just one day? Most likely), I’m sure they could use the campaign as some clout to convince a few arcade game publishers to work with them on that (or, more likely, provide ARM binaries).

We have some ideas in the bag – but can’t confirm anything yet :)

Pledged for one of the advance mini versions. Excellent project, and I have nothing but good things to say about these guys, after buying the fantastic Pibow.

Thanks for the kind words :)

Looks great – I wonder if there’ll be an option for having the screen in portrait orientation?

Possibly. Basically it’ll depend on how much that compromises other aspects (such as strength and reliability). Changes like that can’t be taken lightly anyway :)

I want to buy one but I’m not british enough to give them money :( guess I’ll just have to wait until one hits ebay

You don’t need to be British to give us money! Kickstarter accepts payments from around the world.

I said I wasn’t british enough, I am from around t hhe world but I don’t have british pounds to spare.

Somewhat off-topic (sorry…):
There are stray php tags in the blog source as well as a/leading to a (?) “&title=” string instead of the digg button when JavaScript is disabled. Maybe you could fix that? Thanks :)

At the rate your going you’ll have reached your upper target in a week if not in a few days! Congrats!

This looks like a fantastic idea but I’d prefer to use my TV that already has a Pi hooked up to it. You should look at selling a housed controller and GPIO shield to plug it into or since you look like you might well hit the 65k target just a housed usb controller that’s plug and play with your own Pi image.

I’d buy that in a heartbeat!

“Prototype under development. You may recognise the beardy fella with the hat.”

I’m not sure how you can tell from the photo that @guru is currently sporting a beard or wearing one of his many hats. But I did recognise him

I meant the little pirate chap…

What model screen are you using?

Hi Guys, how can I ourchase 1 of these?

Anyone know if this is still happening? I’ve been looking for a micro arcade solution for some time now.

I believe deliveries have already started.