A great motivator for us in developing the Raspberry Pi was bringing down the cost of computing. Nobody should be excluded from being able to learn about computing, or from using it for work or pleasure, by what’s in their pocket. The pricing of electronics means that some important and useful tools have historically been outside the reach of anyone without a large chunk of capital behind them. You’ll have seen the photography hacks we feature here, which use a Pi to make very, very inexpensive versions of photography equipment like time-lapse rigs, gigapixel rigs, water droplet setups and the like. Off-the-shelf versions of equipment like this can cost thousands of pounds, but a Pi and some ingenuity can bring the cost right down to levels which are sensible and affordable. These projects are not just for amateurs: we have seen professional photographers using Pi-based, home-hacked equipment in preference to the expensive stuff. It works just the same, and there’s a lot to be said for the warm glow you get from making your work tools yourself.

It’s not just individuals and small businesses who are sometimes priced out of doing worthwhile stuff by the price of electronics. Libraries, museums and other public institutions are often priced out of being able to digitise collections by the prohibitive cost of equipment. Kinograph is an astonishing thesis project from Matthew Epler, an artist and film historian. It’s a Pi-powered, open-source, scalable device for digitising old film stock, complete with the ability to stabilise images (another application for OpenCV) and recapture sound. A good DSLR camera is the most expensive part of the setup, at about $2000; the rest of the equipment comes to $1200. (Matthew is working on getting that figure down below the magic $1000.) Compare that to the $480,000 it would cost you to digitise 50 films on reels at a film lab, or the $175,000 it’d cost you to buy a Kinetta (the nearest commercial equivalent device) and a whole world of possibilities opens up. Film stock, be it celluloid, acetate or nitrate based, is not stable, and being able to record and save our film heritage is a pressing concern. We’ve already lost more than 90% of all silent movies, and around 50% of the films with audio made before 1950. I have what could probably be called a bit of an old movie problem; my bedroom wall has framed pictures of pre-talkies Norma Shearer, Lupe Velez and Anna May Wong, like the bedroom of a teenager who’s been time-shifted 90 years. I howl with frustration at poor Eben, who has to share that bedroom, when I read the synopses of pre-code movies I’d give my right arm to see, which have gone forever. We’ve got shelves of books on silent movies, along with boxes of DVDs and old fan magazines. That the Raspberry Pi is a part of this project makes me unspeakably proud.

Here’s a two and a half minute video about the technology.

Matthew is working to iron out a few remaining bugs and to bring the cost down further. He expects to be posting the materials, instructions, and code online at the end of July. Watch this space! 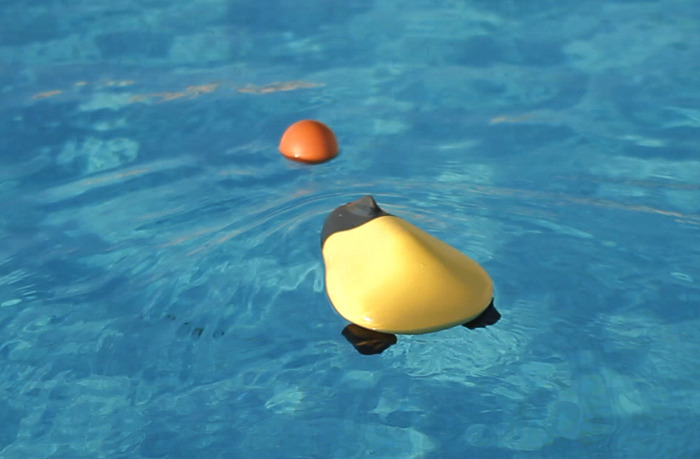 Eben has a shiny thing

This is great, thanks for sharing, I need to make something just like this.

Given that film has an effective resolution of a maximum 16Mpix (2k /2.2Mpix and 4k/8.3Mpix are the current cinema standard) and that lighting shouldn’t be an issue you could probably get away with a less fancy camera than a high-end DSLR. I would suspect something like a Canon Powershot G11 with 11Mpix would be sufficient and cost a great deal less. The only issue would be getting the pictures off as that camera doesn’t have quick access to the RAW files?
So perhaps something more direct? How about the Flea3 4k webcam which has a lens mount and USB3.0:
http://petapixel.com/2012/07/01/the-flea3-webcam-the-worlds-smallest-4k-camera/
$945 plus a simple prime lens should do the job? Ah, but a decent lens would probably add a few hundred to the cost, but at least you aren’t wasting a DSLR!

Perhaps the DSLR is over specced – here’s a decent one (18MP) with lens for much less than quoted.

You probably ignore the lens and get something a bit better.

Matthew is visibly an artist and film historian… he prolly just used his current DSLR and didn’t bought it just for this purpose, no?

I’m not sure what dynamic range the film has, but that is another parameter where DSLRs typically do better than anything less expensive. Of course, in this situation you can simply take two (or more) exposures and combine them.

DSLRs have a LOT more depth than a point and shoot, IMO, you’d want to spend as much as you can afford on the camera because it’s almost the most important part. It’s like, would you want to pay a photographer to photograph your wedding and him use a point and shoot? I doubt it.

Unfortunately, all videos on http://www.raspberrypi.org require flash – while quite a lot video streaming portals already offer html5 video playback even with the open webm codec.

An old projector for what ever film was the target image capture would provide all the mechanical gizmos for the device. Remove the projector bulb and replace with a white LED(s). Then use the RPi camera to capture the image.

This is what I originally bought my RPi for.

I have, on and off for a couple of years now been playing with a rig for digitising 8mm movie. Much cruder than this, made with Meccano and 1.3MP webcam. But then 1.3MP is not a bad match with delivery as a PAL DVD.

It sort of works, but is very slow, +8h for a single reel and longer for an editted movie. It was tying up my laptop, so I wanted to overlap the scanning to an RPi.

However I soon found that, owing to the USB issues, the RPi would not grab frames from the webcam at 1.3MP. So I have been following the development of the CSI camera module with interest. Originally disappointed when it appeared that the focus was not adjustable, and would not do macro. And then more hopeful now that it appears that after cracking the glue it is possible to adjust the focus. (That is what I had already done on the webcam I am using for my telecine).

Finally, last weekend, just on the off-chance I tried the 1.3MP webcam again, after an update/upgrade, and found that guvcview at least can now display images from the webcam at 1.3MP.

So I have at least two avenues to explore further.

Yes, with the R-Pi cam you can focus as close as 5 cm or so, by twisting the lens relative to the housing. I did it with two sets of pliers; another suggestion was turning it with a rubber stopper pressed down on top of the lens. That might avoid some gouging of the plastic threads.
But if you are trying to get an 8mm image to fill the frame, you need even closer focus, almost a 1:2 macro lens because the R-Pi sensor itself is 3.67 mm across.

Well done. but what next? RPi retro 1920’s movie recorder?

I think that most films of this era have pretty dodgy sound, so I don’t expect it’s down to resolution./ But that is a guess.

I’ve tried looking it up, but I can’t find any technical details of optical soundtracks. The best I could do was the Academy curve which specifies a playback roll-off of 18dB at 8kHz (which works out at 667 samples per frame) but no information about the widths of the tracks (which would translate to pixels and then to bits)
Does anyone know where I can look?

I am looking forward to this.

I have over 50 standard 8 and super 8 14 minute reels that my grandfather took from the 50’s through to the late 80’s. To have half the material digitized by a reputable commercial organisation in Australia is a over $AU3000 and I have to send all originals across to the other side of the country – (which has it’s own issues.)

I like the look of this as I have been keen on the idea of doing a frame by frame capture from old cine film bot never found anything cost effective for doing it. Will be taking a good look at this when the details become available.

I think I can get the cost down by re-engineering it by modelling it on a reel-to-reel tape recorder.

It makes the components cheaper and would be kinder to fragile film.

Fag packet pricing gets the engineering cost to less than £200. If you do some clever hacking of old components you could get it even cheaper.

What an excellent idea! I have reel-to-reel machines, a Raspberry Pi *and* Super 8 films (the most recent of which was only filmed in May of this year…*yes* you can still buy it and get it developed) :o)

I did a nice LED mod to a Super 8 projector a couple of years ago, to get over the “smearing” effect of having the lamp on during frame transitions. I’d been wondering if I could automate a film transfer system for a while. It’d certainly be cheaper than professional telecine.

I wasn’t thinking of using an actual tape unit, not least cos the film won’t fit.

However since the speed is regulated optically then we can clone a tape recorder but dispense with the capstan+pinch so it will handle very fragile or damaged film. Note that some have knackered sprocket holes.

If the film is a bit wiggly then a clamping gate might be needed to hold it in the optical plane. Like with a regular projector the film stops dead, gets clamped, projected, and released. Because we are going so slowly this can be done by stopping the drive motors and pushing a plate with a solenoid or a worm gear (like the foot on a sewing machine).

This sounds interesting. For quite a few years, I’ve been thinking that it should be possible to digitize movies by having them move smoothly past a camera; perhaps use a flash so that the film can move at reasonable speed without motion blur. Digitizing machines that use sprockets can have problems with shrunken film, and if not supervised can damage the film they’re supposed to be scanning. A mechanism which doesn’t mechanically use the sprockets but simply observes their position would avoid such problems.

Go archivist who hack! This is one great idea among many!

This is really awesome.

Indeed, but it’s a good start, and it does offer the option to transfer the rescued footage onto something like silver halide.

This is a great project. I want to point out that there are some lower-cost options between your system and the $175,000 Kinetta film scanner. Flashscan8 has models under 100k, and Moviestuff has models under $3,000.