Telecom TV interviewed Eben, in their Executive Insight segment.  Update ten minutes later: well, I got the embed to work without annoying you, but that’s a doozy of a frame that it’s decided to display while it waits for you to press play. Don’t worry. The whole video isn’t that disturbing.

If you’re interested in what we do in terms of business, manufacturing or engineering, you’ll probably find out something you didn’t know. 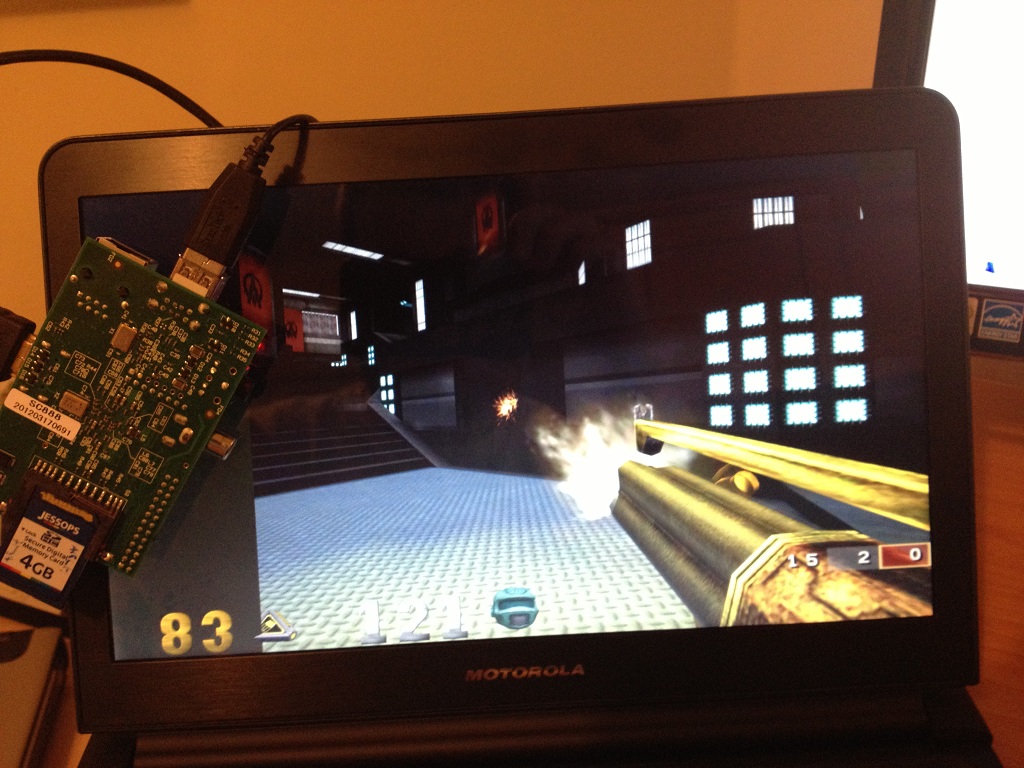 The poster frame looks like it’s going to turn into a Cyriak video :)
http://cyriak.co.uk/blog/?p=248

That first frame ought to be used in a caption competition!

Hearty agree. Submissions below, please. (No prize, but the best will be selected to receive a warm fuzzy glow.)

Well, much as I’d love to, I can’t because every one I come up with would be deemed unacceptable on a family friendly website!!

“Eben Upton takes time out daily to work on his Chris Barrie impressions.”

A census taker once tried to test me. I ate his liver with some fava beans and a nice chianti.

I really wish the dialogue itself is captioned. I’m deaf and would really like to know the interview content. Otherwise it is just 7 minutes wasted watching a Raspberry Pi making circles in the air. Perhaps some day a transcript can be made available.

I was wondering that, too. Thanks for the preemptive lookup!

my hearing is OK and i can barely make out whats being said. I’d like a transcript too

It won’t play correctly for me. Is there another player I can use to watch it?

I, for one, won’t focus on the poster frame (;) but just wanted to say thanks for all the… Pi!

I’m a hobbyist, but the child factor shall not be lost in this household: having three boys, ours will be used for fun family projects, soon to be coupled with an Arduino shields connection bridge. Tis going to be grrrrreat.

Caption: “You did what with you’re Rasperry Pi?”

Why go to the trouble of recording an interview like this if you can’t get decent sound quality? I really struggled to understand what Eben wass saying!
Complaint over… Good interview but would have liked info on the up-coming camera module!

For those who wanted a transcript, here’s what I’ve done so far.

Ian: Hello I’m Ian Scales and you’re watching TelecomTV Executive Insight. Today I’m talking with Eben Upton. Eben is the executive director of Raspberry Pi. So Eben, that’s the summary; tell us what is Raspberry Pi and why you embarked on this project?

Eben: Raspberry Pi is a credit card sized Linux er computer. We created this here in Cambridge in the hope that we could encourage more children to learn to program. At the university we had a terrible recruitment continue to have a I believe a terrible recruitment crisis er crisis. We er we struggle to find enough applicants to come and study computer science at Cambridge. We’ve gone from having 500 applicants a year in the mid 1990s down to more in the region of 250 for about a 100 places. And that still sounds like a great over-subscription ratio but it’s certainly not what we’d been used to in Cambridge. So really Raspberry Pi started as an attempt to erm reboot some of that 1980s culture in that children would have in their bedrooms a machine that they could use to learn to program.

Ian: Though you designed the Raspberry Pi for the education market in the UK, have you been surprised at how it’s taking off into other areas?

Eben: We honestly did believe that this was a 1,000 to 10,000 unit opportunity. Er, I think what we didn’t understand was that there would be an enormous interest in this from the hobbyist community, the adult, technically literate adult hobbyist community. We didn’t also didn’t understand that there would be enormous interest in it from the industrial market. That this makes a fantastic little industrial computer. And so those two things really drove two orders, two orders of magnitude demand surprise for us. That we’ve really spent most of the last, most of the last year dealing with.

Ian: You have a $35 price point. Are you confident that you can maintain that or even improve it?

Eben: There’s one of the interesting things about this device that there’s no, there is nobody making a loss in the in in the supply chain. I think that when we first came out with that price point, there was an assumption that this was in some way a limited time offer, that somebody in that supply chain would sooner or later get sick of losing money and that we’d have to jack the price up. Very confident we can keep the $35 price point for this. We’ve already back in November doubled the RAM. We started off shipping with a quarter of a gigabyte, we now ship with half a gigabyte. We’re able to double the RAM at the same price point. So we’re we’re very confident about that. We’re also very confident er that we’re gonna be able to deliver the $25 machine that we originally promised. That’s the same machine, but without the network interface.

Ian: The thing we’re interested in is of course is M2M. And it strikes me that as it’s probably struck a lot of people here in Cambridge that this device is ideal for more complex M2M applications. Um, is this a market that you’re going to actively chase?

Eben: We’ve seen a lot of interest in the M2M space in the industrial control space. There are a lot of um historically I think the market structure has been there have been a lot of little industrial verticals for for different M2M for different control and M2M type erm applications. One of the nice things about the Pi is that it can address almost all those verticals so it aggregates all of those together into one big market and then addresses it as a very very erm a very good price point.

Ian: Another big area for Raspberry Pi of course might be the developing world. How important is that going to be to the success of Raspberry Pi?

Eben: I think that’s another market that we didn’t really anticipate because we had this um laser focus on the UK educational market. It’s something we haven’t anticipated. I think it’s something that’s being slow to develop. It’s very early days for us yet. Right now we’re shipping about a third of our units we’re shipping between 1 and 2 thousand units a month and about a third of those are going to the UK , third of them to North America and a third of them to the rest of the world. The rest of world primarily means um Europe, South Africa, um Australia and New Zealand. So there are enormous swaves of the world where we we haven’t had the level of impact that we might now like to have. I think the next year is going to be about trying to address that as well.

That’s up to 3:46. My laptop’s getting hot and I’m bored of looking at Eben’s face at the mo, so I’ll finish it off tomorrow unless anybody else wants the challenge.

Welcome to my life. :D

(And thank you very much – much appreciated!)

Mary, I want to express my sincerest thanks to you for this marvelous transcript. I really like to know what is being said, and I know it is harder to transcribe than it may seem. Thank you, thank you, thank you!