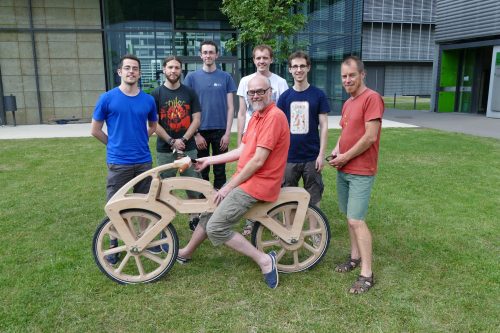 If you have children yourself or have seen them in the wild on occasion, you may be aware of how much they like balance bikes – bicycle frames without pedals, propelled by striding while sitting on the seat. It’s a nice way for children to take the first steps (bah-dum tss) towards learning to ride a bicycle. However, between 1817, when the balance bike (also known as a draisine or Dandy Horse) was invented by Karl von Drais, and the introduction of the pedal bike around 1860, this vehicle was the new, fun, and exciting way to travel for everyone. 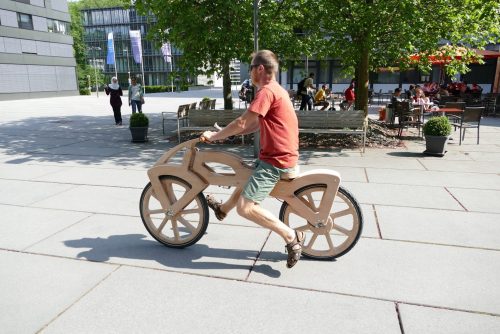 We can’t wait for the inevitable IKEA flatpack release

Having previously worked on wireless braking systems for bicycles, Prof. Hermanns is experienced in adding tech to two wheels. Now, he and his team of computer scientists at Germany’s Saarland University have updated the balance bike for the 21st century: they built the Draisine 200.0 to explore pedal-free, power-assisted movement as part of the European Research Council-funded POWVER project.

With this draisine, his team have created a beautiful, fully functional final build that would look rather fetching here on the bicycle-flooded streets of Cambridge.

The frame of the bike, except for the wheel bearings and the various screws, is made of Okoumé wood, which looks somewhat rose, has fine nerves (which means that it is easy to mill) and seems to have excellent weather resistance.

Within the wooden body of the draisine lies a array of electrical components, including a 200-watt rear hub motor, a battery, an accelerometer, a magnetic sensor, and a Raspberry Pi. Checking the accelerometer and reading wheel-embedded sensors 150 times per second (wow!), the Pi activates the hub motor to assist the draisine, which allows it to reach speeds of up to 16mph (25km/h – wow again!).

The inner workings of the Draisine 200.0

More detailed information on the Draisine 200.0 build can be found here. Hermanns’s team also plan to release the code for the project once confirmation of no licence infringement has been given.

Take to the road

We’ve seen a variety of bicycle-oriented Pi builds that improve safety and help with navigation. But as for electricity-assisted Pi bikes, this one may be the first, and it’s such a snazzy one at that!

If you’d like to see more cycle-based projects using the Raspberry Pi, check out Matt’s Smart Bike Light, David’s bike computer, and, for the fun of it, the Pi-powered bicycle beer dispenser we covered last month.

The Pi Towers hive mind is constantly discussing fun new ways for its active cycling community to use the Raspberry Pi, and we’d love to hear your ideas as well! So please do share them in the comments below.

Look forward to reading more on this when I get a bit of time, the 16mph/25kph will be a limit imposed by EU law for e-bikes, hence the way the motor works.
It would be able to go faster if circumvented I assume ;-)
Though the law is for pedal assisted bikes (e-bikes), this has no pedals so cannot be pedal assisted, it would therefor come under scooter/motorbike law ?

I think you make an excellent point there Ben. The lack of pedals is usually applied to the moped idea (something that was circumvented by Honda and Yamaha in the late 70s, the FS1e was every schoolboy’s dream, for example).

In those cases the alternative was a 50cc petrol motor – but I’m unsure how lawmakers would view any “non-human” form of propulsion and hence this might well fall into unknown territory. I expect it may be viewed in a similar fashion to those e-skateboards that are all the rage at the moment: illegal to use on the pavement (duh!) and probably illegal to use on the road too.

The concept is a great idea – but practically, it looks like it’s going to need work before/if it’s a commercially viable (read legal to use) prospect.