Have you ever considered attaching your Raspberry Pi 4 to an Apple iPad Pro? How would you do it, and why would you want to? Here’s YouTuber Tech Craft to explain why Raspberry Pi 4 is their favourite iPad Pro accessory, and why you may want to consider using yours in the same way.

We’ve set the video to start at Tech Craft’s explanation.

Having installed Raspbian on Raspberry Pi and configured the computer to use USB-C as an Ethernet connection (read Ben Hardill’s guide to find out how to do this), Tech Craft could select it as an Ethernet device in the iPad’s Settings menu.

So why would you want to connect your Raspberry Pi 4 to your iPad? For starters, using your iPad instead of a conventional HDMI monitor will free up desk space, and also allow you to edit your code on the move. And when you’ve connected the two devices like this, you don’t need a separate power lead for Raspberry Pi, because the iPad powers the computer. So this setup is perfect for train or plane journeys, or for that moment when your robot stops working at a Raspberry Jam, or for maker conventions. 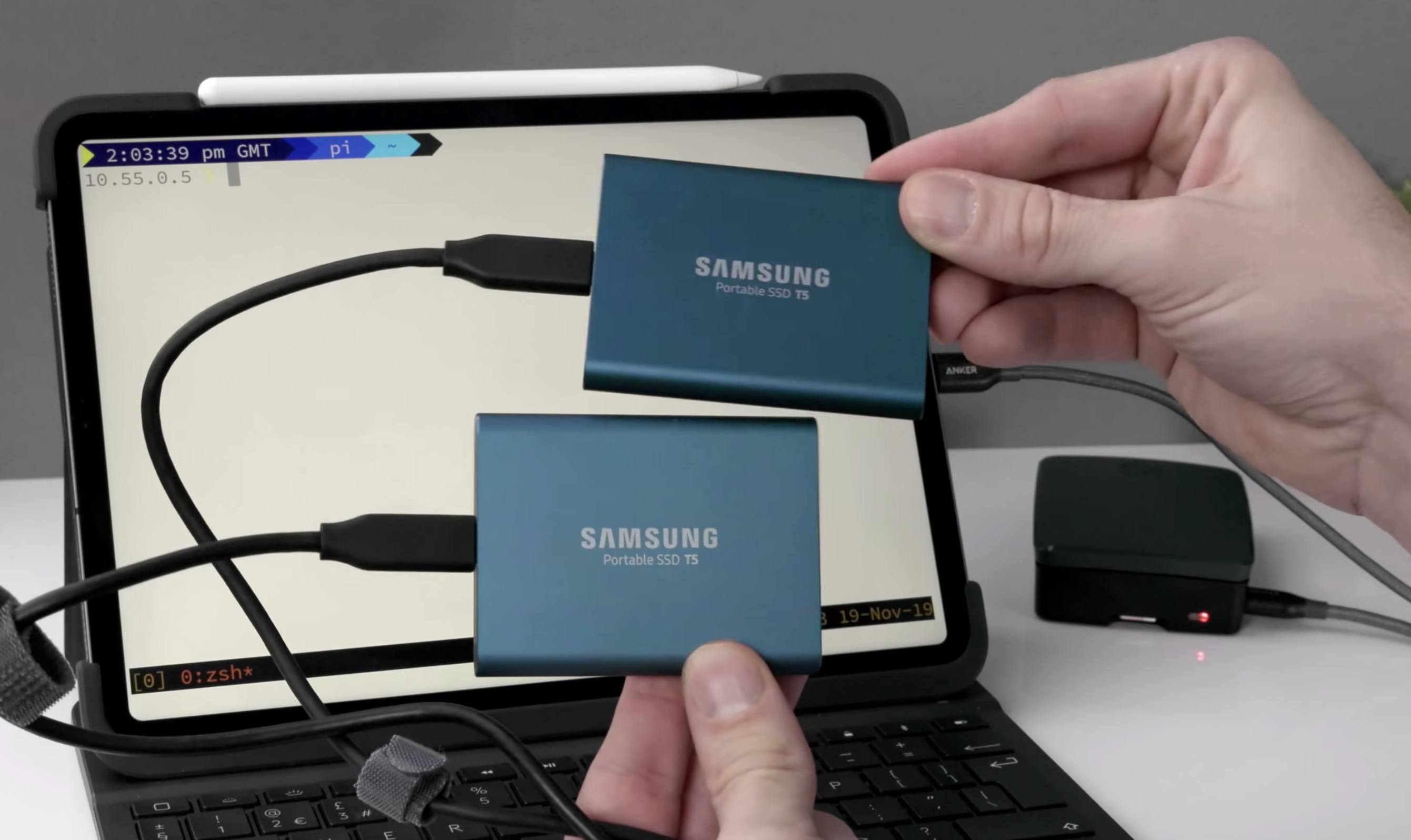 You can also use Raspberry Pi as a bridge between your iPad and portable hard drive, for disk management. 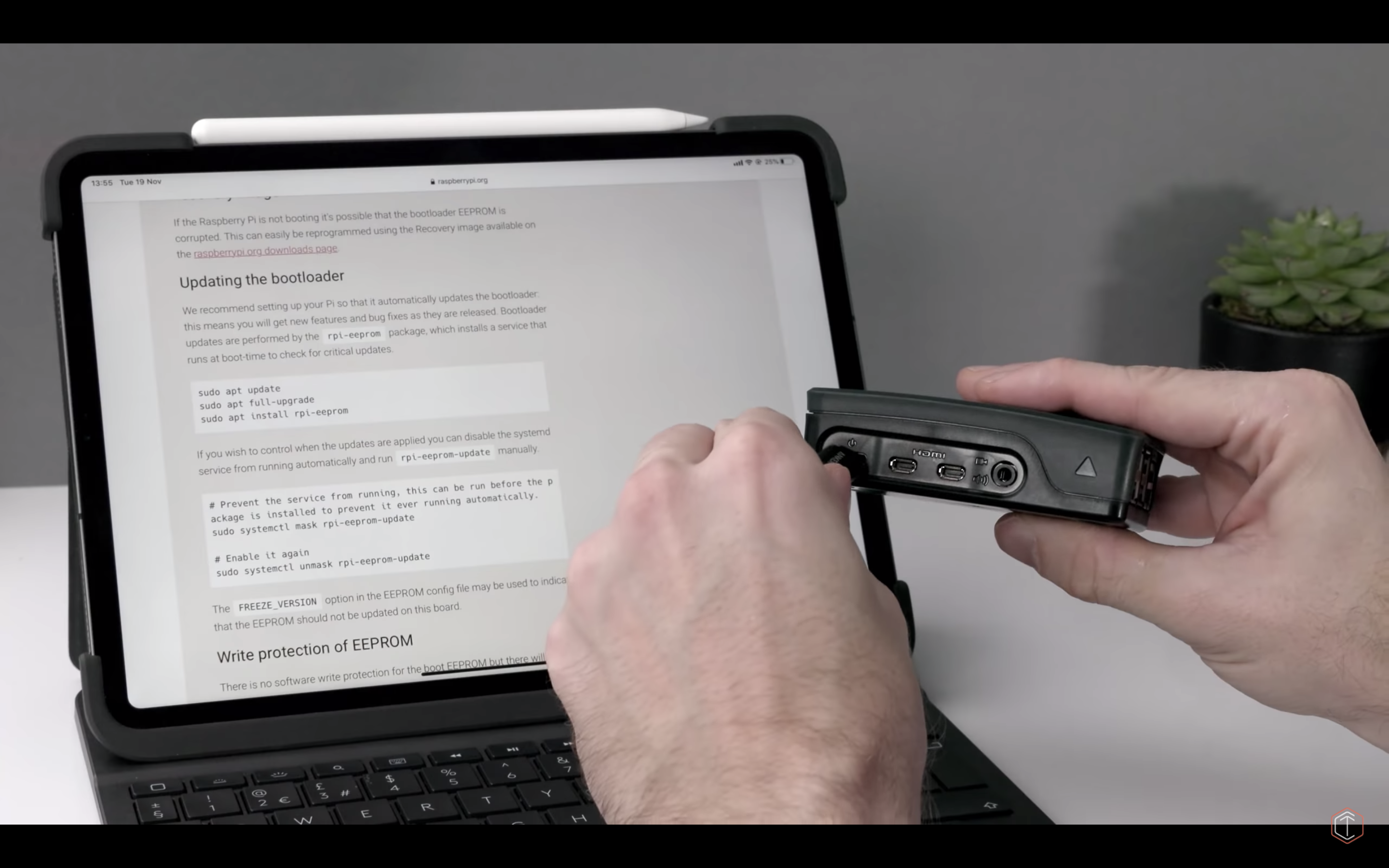 For more information on using Raspberry Pi with an iPad, make sure you watch the whole video. And, because you’re a lovely person, be sure to subscribe to Tech Craft for more videos, such as this one on how to connect wirelessly to your Raspberry Pi from any computer or tablet:

Fake cases — make sure yours is the real deal

So, in theory, you could run a X11 client on the iPad and launch the Pi’s GUI on that, giving you a full desktop environment as well. Interesting…

@Stack, yes you could do it.

I’ve collected good references to connect any *nix to your iPad:
http://holisticsecurity.io/2019/10/28/android-tablet-or-ipad-as-extra-monitor-for-linux

Does this work on the Ipad 7th generation with a lightning to USB-C cable?

Despite trying with all kids of adapters, I couldn’t get it to work on Lightning.

The second video linked shows how to do a similar setup using just WiFi which works really well with Lightning-based devices.

I tried this last night with a Gen 1 iPad Pro 12″ (ie lightning connector). Using the Apple Lightning to USB camera adapter didn’t work – even with power being supplied via lighting port on the same adapater.
Power was getting to the ZeroW as the green activity LED was working and in the Settings on the Pro an Ethernet (I think) option briefly appeared with the Wifi and Bluetooth. I think there was a lack of power issue during Pi boot.
This was using a ZeroW which was tethering to my MacBook.
I’ve been able to get a portable HDD working using the same adapter, but only using an external USB hub with it’s own power supply. Plugging this is meant that the ZeroW booted and SSH login was possible using the iPad.
Now to try with a Pi4…

I found the TechCraft channel and these iPad / RPi videos last week – very good – thanks Rob!

Be aware that if you’re iPad Pro is WiFi only, (i.e. not WiFi and Cellular) and your connecting via the USB-C connection you won’t be able to do Internet connection sharing with as only the iPad (WiFi + Cellular) has the ‘hotspot’ capability.

I’ve also tested that this works well with the Pi Zero and 3A+ using either of the 2 Apple dongles work fine as does a simple USB-C to USB-A adaptor. Note that 3A+ needs a USB-A to USB-A data cable and an extra parameter added ‘config.txt’ to force the USB port to OTG (peripheral) mode:

Could the raspberry pi 4 be used as a docking station for a windows 10 laptop?
It would be a cost effective solution if it was possible.

I followed all your instructions (including setting up the OS), and even bought an Anker USB cable, but I am unable to get the Raspberry Pi to boot. I have no trouble connecting to the Pi4 via my home network.

I’ve found the best option of keeping the iPad Pro powered, was to use ‘USB-C Splitter, Dual USB C Audio Charge Adaptor Headphone’ – there are tons of those on Amazon. It’s meant for powering the iPad Pro, while adding a USB-C headphones or DAC, but if you put an Anker good USB-C -> USB-C cable on the Audio output, and connect the other end to the Pi4, you get a fully powered (even by portable battery) both iPad Pro and Pi, and since you know the IP, you can both SSH and VNC to it for whatever way you prefer working. The same setup works on all modern phones with OTG too (I got it working on Galaxy Note 9). To top it up, I also put the Logitech wireless USB adaptor in Pi4 USB 2 port, and had fully working keyboard and mouse too. The power was still good enough (I did use 18W output from a power pack – Omars Power Bank 20000mAh, orange output, but I’m sure you can do that in other ways too). Similar to using a USB Hub, but a lot more compact.

I can ssh from my ipad pro with the instructions supplied so thanks for the steps! I do have a question. I would have assumed that the pi would have internet access thru the usb C connection. If I issue a sudo apt update, I get a failure to resolve. Also when I ping 8.8.8.8 I get Network is unreachable. Thanks.

Is there a way of doing this with an android tablet and raspberry pi 3B?

My iPad Pro isn’t here yet, but I was able to serve up a Gatsby/React build from my pi by specifying the host 10.55.0.1 and port 8000 and was able to access it from my connected laptop. I’ll be interested to see if it works when my iPad shows. I hope this is of help.

I know it’s been a couple of months, but how did this go when you got your iPad? Were you able to access the localhost in safari?

Thank you! This is a very useful feature – I now have my iPad Pro 11 + new Magic Keyboard connected to a Raspberry 4. SSH works as expected, and using NoMachine proved to be far better than VNC for me.

So you’ve remotely connected to the PI, via USB-C? How’s the image quality, any lag? Is it full screen and usable?

I’m interested to try this with my iPhone. Will this work with all iPhones/iPads or just the ones specifically mentioned ?

Now, if only there were a decent Xserver running available for iPads!
With the new MagicKeyboard or the BrydgePro+ and the new iPadOS mouse/trackpad support, one would have a real desktop environment to add to an iPad

Hi, thanks for your tutorial,
When connected with the cable, does wifi internet still work?

Rob, thank you for sharing these resource. Here is a different use case, could you connect to the iPad cameras and microphone/speaker from a program running on the Pi? and have you tried connecting a Coral TPU to the PI to run your python notebooks with tensorflow lite?