A short post today: I’m running around getting ready to go to the airport. Yesterday, I found this piece of downright splendour at Cult of Mac. It’s made by John Leake, from RetroMacCast. And it’s a working Mac, only it’s a third the size you might be expecting. There is (of course) a Pi in there, running a System Software 6.0.8 emulator under Raspbian.

“Mac Mini” suddenly has a whole new spectrum of meaning.

This build was done using a mixture of off-the-shelf parts and hand-moulded PVC – and a Pi. You can hear more about it at this week’s RetroMacCast – I want to find out if there’s anything that fits into the 1/3 size floppy disk slot. 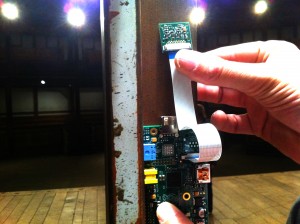 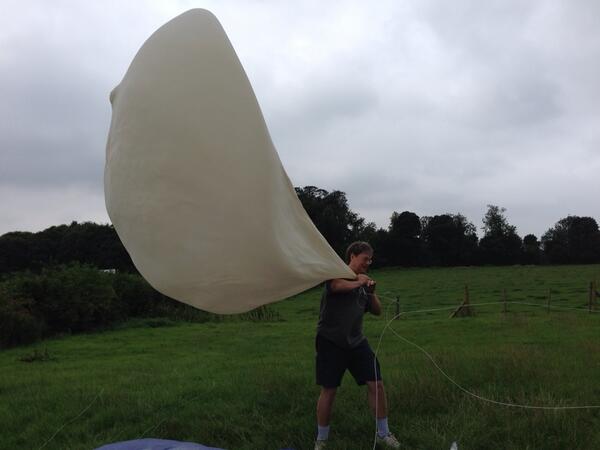 I wonder why he used System Software 6.0.8? BasilskII will run MAC OS 7.5.3 on the RPi and its available for download from Apple.

tried it but the link no longer works… so I guess apple pulled it?

In the picture blog, he had a either 128K or 512K. You still need to get a ROM for the emulator so he probably just got the ROM image from his Mac. 6.0.8 is the highest supported version in that ROM.

I don’t think there is anything behind the little floppy dick slot. I would probably unsoldered the SD-slot from the Raspberry Pi and found a way of having that sit behind the slot.

Very cool though. I had a succession of Macs at the company I work for, before they went MS only. Starting with a full size one of this, and culminating in a PowerBook 5300.

I meant “DISK”, and I am of course blushing with embarrassment at the moment!

You’re not the first and won’t be the last. Someone I know once made that mistake without autocorrect. Or a computer. :P

On the subject of the slot, I was thinking “SD slot” as well, but nothing as extreme as taking the slot from the Pi. I was thinking maybe a secondary, USB-powered reader instead.

I’d’ve done it on purpose, if I’d been quick enough to think of it in time.

Just going to add, why not use an SD to USB. No need for solder etc (unless you really want to)…lets you use SD cards just like floppies but keeps the boot SD out of the way.

Woah! Too cool! That’s added on my ‘things to make’ list…

Liz this seems to be a better video: http://www.youtube.com/watch?v=y-x-RseAns8

Agreed! So much so, that when the hand comes in near the end, I was startled from having fully swallowed the illusion of a full-size Mac.

It would be fun to run the 1 bit artwork game shufflepuck on it for a benchmark test:

Be still my beating li’l heart! After Dark’s Flying Toasters screen saver, featuring the Lunatic Fringe space junk shoot-’em-up game, you’re gettin’ installed, whether you like it or not! :D

Do you remember an isometric, grid-based D&D-type thing? I have only the vaguest memories from when I was about 9 (my friend Cecily’s Dad was an OU lecturer, so had a precious Mac we were allowed to use occasionally); I’d love to have a poke at it again.

Oh, go ahead and twist the knife while you’ve got it in there, you young whippah-snappah! :lol: I was a mid-career Naval Ossifer working on my MS (More of the Same) in CS here at NPS.

All of the EE students were buying Intel 80286-based IBM PC/ATs and clones with MS-DOS because the 386 and PC/XT weren’t quite available just yet, and they all laughed at the Little Beige Boxes. Then, it came time to print our theses and the standard-issue way was to edit the text on an IBM 3270 terminal emulator talking to the campus IBM 370 series mainframe (which I never once used other than to set my password). You had to print out the thesis on a high-speed line printer only located in the computing center (“local” low-speed, typically dot-matrix printers were in department offices and maybe a few labs).

Then, you’d have to go back and edit the text-only page-definition code and content to try to get the various document parts to fit in their registrar-defined boundaries (e.g., title page, table of contents, headers, footers, body text, heading text, footnotes, glossaries, index, etc.). Most people destroyed a good chunk of what’s left of timber in the Western states printing, reprinting, and rereprinting their drafts for literally weeks just trying to get everything to fit.

I used my Fat Mac 512K, MS Word 1.0 (first developed for the Mac, not the PC, as were Multiplan-cum-Excel, and PowerPoint, as Windows 3.0 was still more than a year away) , and one of the first LaserWriters in existence (just) outside Silicon Valley (owned by a tiny startup a few of us students had formed to develop Mac and DOS drivers for the first Sony CD-ROM readers, WORM drives, and other write-once devices) to write, format, and print my first reader’s and thesis advisor’s copies of my thesis. After incorporating their recommendations, I printed it out one more time, they signed off on it, and I took it over to the registrar.

The woman helping me just gushed at the finely-serifed, proportional Bookman typeface and how every character fit exactly within the boundaries of their acetate transparency templates usually used to shoo away pretenders to the thesis throne. It was the first time anyone had submitted a perfectly-formatted thesis the first time, and in a proportional typeface actually meant for book publishing (my code fragments were in monospaced Courier, of course). She asked me how in the world I had done that and when I told her, she turned to her boss and exclaimed, “We’re getting Macintoshes and LaserWriters so we can do this with the professors’ papers!”

At the time, the only laser printer on the entire campus was a ~$50,000 Canon model only used by The Chosen Few who knew how to use Unix nroff and troff formatting editors. They use “dot” commands on each line to define text format, sorta like HTML/SGML tags do today, but also supported formulas, mathematical symbols, etc. Don Knuth’s first cut at TeX was still a few years away at that point.

Getting old is hard to do :roll:

A credit card reader would fit in that floppy disk slot

Very cool indeed! At least, until Apple decides to prosecute him for violation of the usage & terms of using their logo…

Please tell me the creator has christened this an Apple Pi…?

GROAN … I just wish I had thought of that! :D

You’re slacking Jim! Normally you are the one coming up with the cringe worthy puns!

It was ripe for the picking! I can’t believe I’m the first person to have made the connection.

Cute :)
He should have shown it standing next to it’s full-size equivalent.

He does show a side profile of the Mini next to the Big Mac on the page that you eventually get to if you follow the RetroMacCast link provided by Liz, then there is a “one-third scale Mac” link in the first paragraph:

On that page, the fourth image down is:

It’s a pretty good visual that shows one-third scale in each dimension really means 1/9th the area on each face and 1/27th of the volume.

Whoops, mea culpa! I should have RTFA rather than just watching the youtube clip.
It wasn’t until I *did* read the blog that I realised the case *isn’t* 3D-printed – impressive!

I think I still have an Apple II in my basement, and the original box of “AppleWorks” software for it sits on a shelf in my office (green text on a black screen).

It’s been years since I’ve plugged it in. Not sure why I keep it.

You can sell it and get a crapload of $$- I one saw one with computer, monitor, drives, and a bit of software go for $600 after some really frenzied, desperate bidding. Put that sucker on eBay!

Be very careful with old electronics, especially the switching power supplies in things like Apple ][s. The electrolytic capacitors can lose their ability to take charges at full current and voltage and need to be “re-formed” by gradually charging and discharging them at slowly-increasing voltages up to the normal working voltage (usually no more than half the rated voltage printed on them). I had an old one roast a power resistor that smoked and sputtered almost to destruction.

At the Computer History Museum, we were able to re-form some of those kinds of capacitors in 1950s IBM RAMAC hard disk drives (the first commercial hard drives, 5 MB, one pair of read-write heads moved up and down between about 30 platters, with an average access time between platters of a couple of seconds!), a 1960 IBM Model 1401 mainframe, a 1962 IBM Model 1620 desk-plus-credenza-sized office computer, and many others. However, the capacitors typically needed to be desoldered and resoldered between being re-formed.o

I could always tale your Apple ][ off of your hands?! For something in return? I would kill for one of those things….

That is cool! My nephew will be thrilled! I called it Mac Pi (play on magpie)