Sandy Walsh thought it’d be cool to host a trivia night in his living room. Most of us would make do with paper, biros and shouting: but it’s from little ideas like this that splendidly grandiose Raspberry Pi projects are born. In this case, projects involving a shipment of Chinese bike handles and a very large amount of speaker wire. Sandy wanted a physical, game-show setup, so he hacked together some switches and an old terminal block he had lying around (you will probably have to buy one) with speaker wire and a Pi Face interfacing board. The Pi runs a GUI for the game on a TV, and also deals with inputs from button switches mounted on each handle, so players can buzz in with an answer. The GUI works in concert with a live Quizmaster, who asks questions and adjudicates answers. Here it is in action:

Sandy says he thinks there’s a lot of refinement that could be added: he’s keen to see people add patches to what he feels is a bit of a hack. You can check out the repository on GitHub. This isn’t a difficult build, and I’m considering getting one of our work experience students to build a similar setup for the demo table: any refinements you think we should add?

Give us your best (Mathematica) one-liner 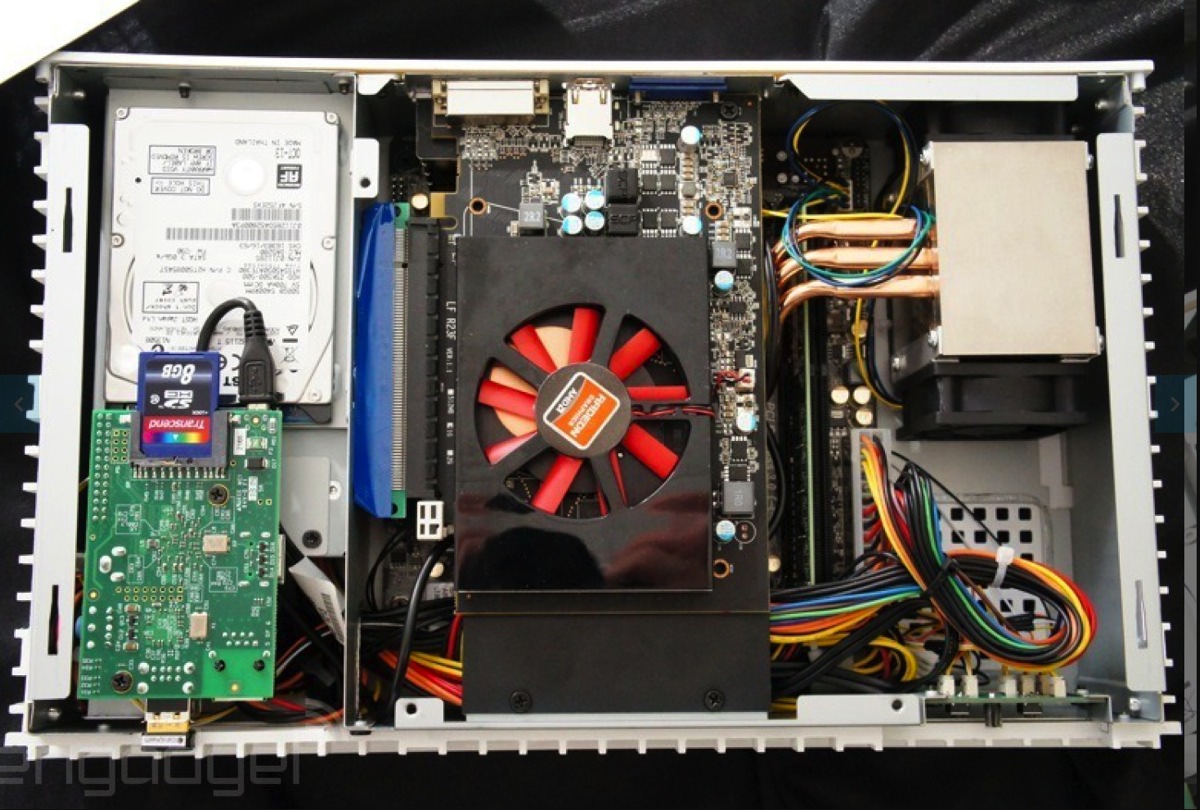 Limelight: who needs a Steam Machine when you have a Pi?

Very cool! I remember building a buzzer system for my high school quiz team to practice with, using TTL logic. It was very crude and not too reliable. This project looks great.

“What is ‘Best use of a Pi in a living room on an otherwise boring Saturday night’, Alex?” Rats! This clicker is broken! :D

Suggested “refinement” click three times, more beer is brought to you. Because being in a quiz team is thirsty work.

You could make it deduct penalty points, if someone buzzes when they’re not supposed to. You could add different buzzer noises for different players (a-la QI).

Reminds me of when me & my family spent hours playing “Buzz” on the Playstation 2 several Christmases ago :-)
http://uk.playstation.com/ps2/games/detail/item37121/Buzz!-The-Mega-Quiz/

there is something similar at https://bitbucket.org/IronBishop/scimmiaquiz : based less on GPIO (potato keyboard: didn’t work as expected) and more on wireless session on people’s phone

The obvious refinements from my PoV are:
* After the first button is pressed, lock out the others until the quizmaster re-sets it (may already do this)
* Physical indicator lights (who has buzzed) as well as on-screen text (for the sort of rules where first to buzz gets to answer).
* Lots of potential scoring complications if you want to make it automatic – or an interface that allows the quizmaster to enter arbitrary awards and penalties to avoid the whole lot.
* Just A Minute count-down timer that stops and re-starts on challenges!

Anyone else thinking electric shock?

If that is classed as a bit of a hack then I’m not sure what you would call most of the code I have ever produced!

I built something very similar a number of years ago using controllers from a Playstation game called “Buzz!” – 4 controllers, each with 5 buttons, on a single USB.

Perhaps not as complete as the above, but less hardware hacking involved ;) My code is still up at https://launchpad.net/pyquizmaster

Speaker wire is a really good choice for long distance switches… why didnt i think of that, but its cheap, and easy to use :D

Also, need to have a proper look through the code. but want to see if i can improve it, maybe variable numbers of teams, and a control panel for the quiz master (after all, for 8 buzzers, you only need 8 io pins, and a dazychaned ground)

I built something similar years ago. Then, one day I found a second-hand Buzz (USB) controller on ebay.

It worked out of the box. This Buzz behaves like a joystick.

Nice project…would be awesome if it were turned into an open source game show platform with downloadable packages of questions and random epic win/epic fail videos to play on the win/loose pages :D

I made a simple Python program to interface with buzzers, though it operates by Scholars Bowl rules: http://www.kshsaa.org/Publications/ScholarsBowl.pdf
I used it to moderate a Scholars Bowl meet at my high school, with great success. I put the code on github. (https://github.com/kenanbit/pi-bowl)