There’s just over a week to go on the MagPi’s Kickstarter. They’ve met their original goal, but they’ve got some stretches to make, and we’d love to see you support them to become even bigger and better in 2013. Regular readers will know that we are big fans of The MagPi, the only magazine in the world dedicated to the Raspberry Pi. It is created each month by a team of volunteers and usually with unique content found nowhere else. You can download each issue for free from the Pi Store or from www.themagpi.com.

Here at the Foundation, we’ve been printing each issue off – which takes time and costs a fortune in ink. (It has been bandied about that perhaps the next world-changing project we need to engage in is an affordable printer ink scheme.) The MagPi folks are often asked to make printed copies of the magazine available. It’s a tricky proposition, as they are volunteers with no capital, so they started a Kickstarter project on 1 December to make all 8 issues available in print. The MagPi team have told me they are blown away by your support. At the time of writing they have  over 400 (several of you have signed up in the few minutes since this was posted – thank you!) backers and have tripled their financial goal – money which gives them the opportunity to explore the translations into other languages they’ve been exploring, and the ability to make print copies available in the future. They have also seen several schools place orders for the magazine, which we’re very excited about. The money is important for their continued success, but even more important is the number of individuals who support them subscribe to the printed edition: it’s the number of subscriptions which gives them the security to keep doing what they’re doing, so we’d love to see you sign up to their Kickstarter.

What you don’t know is that with every single pledge on their Kickstarter project, The MagPi team is making a donation to the Raspberry Pi Foundation. (We didn’t know this either until they mailed us about it.) The Kickstarter rules do not allow them to mention charitable benefactors – but I can mention it here – and we at the Foundation are really touched and grateful for their support; the MagPi guys already go above and beyond to support this project, and this bit of icing on top of the cake really caught us by surprise. Eben and I are also supporting the MagPi Kickstarter project by making available a limited number of personalised, signed copies of the “Raspberry Pi User Guide” book to people pledging more than £100. The MagPi stand at the Bristol BCS in a rare quiet moment – spot the floppy-haired interloper.

With only a few days remaining there is still an opportunity to participate in this project. There are a wide range of pledges available and if you want these to be a gift, the MagPi team have created gift certificates that you can download and print at home after you have made a pledge. If you don’t want any magazines or Raspberry Pi hardware, the Fuzzy Glow (£2) and Sticker Madness (£5) pledges will let you show your appreciation for keeping The MagPi free.

We are also very pleased to announce that Pimoroni and Adafruit Industries will be sponsoring The MagPi during 2013. Ian from the magazine mailed me about the news this morning; he says: “We are both humbled and incredibly excited to be supported by these companies. Pimoroni and Adafruit, together with almost 400 other supporters, have all contributed to make our Kickstarter project a huge success for us, our partners and the Raspberry Pi Foundation.” 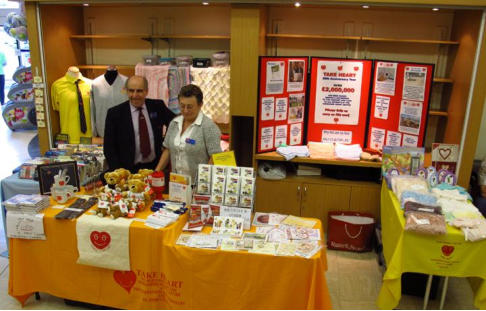 The support of the MagPi from many of the companies involved with Raspberry Pi related products has been excellent. It goes to show that the community extends right through to the commercial sector too!

Work will soon start on the 1st issue of 2013, to be released for February (January is being skipped due to seasonal holidays etc).

Thanks a lot! Hopefully over 500 backers by the end of it with any luck. Cheers

If you support the magpi on kick starter does that also get you a subscription? I want to make sure I get a subscription, so if not, please advise how to subscribe.

The success of The MagPi Kickstarter project has confirmed that we will print each issue next year. We will be in contact with every backer of the Kickstarter about subscribing to Volume 2.

However we would like your feedback. What subscription model would you prefer? For example we could do a pay as you go model where you are billed £2.50 each month. Alternatively you pay upfront for Volume 2; 11 issues for £25 with maybe a free binder included? Let us know in the comments.
Thank you for your support.

I would say it is probably more likely to be around the £30-35 mark for the Volume 2 mags as there will be 11 issues instead of 8 this year.

This is all speculation though as nothing is set in stone.

I look forward to reading the MapPi issues and reliving my youth spent devouring Creative Computing and Popular Electronics. (I’ve never had the heart to discard them yet)

I enjoy putting a little money in to the RasPi culture because I think with volume, the community can manage to provide some very nice kits for directed exploration in programming coupled with science. Radio Shack used to sell project books and kits for this type of hobbyist exploration. I don’t see any sources for this generation.

Hopefully your copies of The MagPi will eventually fill a shelf, maybe even a bookcase, and you will be equally as bad at throwing them out! In 10 years time I want to see pictures… :-)

We have been thinking about potentially teaming up with someone to provide kits that relate to the hardware articles in the magazine (or maybe do it ourselves). This may work on a pre-order system or similar if we do it ourselves. No promises, but it is definitely something that is being talked about at the minute.

Thanks for your support…and have a great Christmas and New Year.

Writing articles for The MagPi has been, and continues to be something that makes me smile. Why? Simply put: The MagPi team are a great bunch o’people to work with, The Foundation are too, and lastly but by no means lastly the awesome readers of the magazine, and indeed the whole Raspberry Pi Community have demonstrated just how much creative fun one can have with this tiny box o’wondrous tricks :)

Many thanks to all who have supported the Kickstarter to-date.

Have to say: you guys are a total joy to work with too. Thanks so much for all your work this year; here’s to a fantastic 2013!

Hi MagPi team – I just want to add that what you have done in the last year is fantastic, I know that a phenomenal amount of work goes into the magazine and it’s reflected in the quality of the product. Have a good Christmas!

Many thanks clive. Have a Merry Christmas too :)

I think a regular subscription you pay in advance is the way I would prefer. I also live in America so I expect to pay more for postage.

We are considering many options, as Ian has said above.

One of them is an auto-pay subscription model, and another is a pre-pay system whereby we would open orders on around the 15th of the previous month and then start sending out the mags in the first week of the month.

I’m sure we could manage something along those lines!

Thanks Liz for all of your help with this! It is great to have the Foundation behind us.

Hope you guys have a great Christmas and manage to get a bit of time off during the holiday period!!

Would love to support this, but 15 GBP shipping (to Germany) is quite a lot…

As I’m sure you can imagine, 8 printed magazines, a binder and some stickers actually weigh a fair bit. It is not a huge package, but the weight makes the postage cost shoot up.

I hope you still feel able to support our Kickstarter – even if it is just one of the Fuzzy Glow or Sticker Madness pledges…it all helps, and will help us to continue printing the mags into 2013 and beyond.

For me too 15 GBP for shipping seems to be a little expensive. I’m evaluating to buy the volume 1, but I’m not so happy spending more than the half of the value in shipping.
Maybe other companies can ship at cheaper prize due to the amount of the traffic involved.

Would be great to have you as a backer! Unfortunately as I said the full binder with all the 8 magazines weighs over 2kg…which when sending around the world costs a lot of money.

When we send out the individual magazines in the future the price will be more reasonable at around £1-2 for most places around the world per magazine as we will use Royal Mail for postage.

In the words of Lex Luthor – ‘I never thought this thing would go the distance’.

I originally expected that The MagPi would be nothing more than a one-off, 4 page pamphlet introducing the Raspberry Pi.

I’m surprised to see that it still has plenty of steam – and this is thanks to all the contributions from volunteers. I’m proud to have been a part of it, and hope it has given some of you a helping hand to get started, programming with the Pi, experimenting and interfacing.

I look forward to watching the Pi develop further in 2013, and hope that the MagPi will continue to fly along with it.