It’s the first of the month again. What better on a cold December evening than settling down on the hearthrug with a paper copy of the MagPi and a glass of mulled wine, and building a Santa-trap with a Raspberry Pi? Our friends at The MagPi do an incredible job. They’re now working on the ninth issue of the magazine: it’s the only magazine in the world that’s dedicated to our little computer and what you can do with it. It’s produced entirely by volunteers – if you want to get involved, there are details in each issue telling you how to join in. The magazine is published under a Creative Commons licence: every issue is completely free to read online. It’s an amazing educational resource, and for us it’s a monthly reminder of just how totally incredible the community that’s been building up over the last 18 months or so around the Pi is.

Many people have been asking for a printed version of The MagPi. Last month, the MagPi team started to explore print. Many individuals prefer a paper magazine, and schools and colleges in particular find them a very useful way to consume The MagPi. The paper version of last month’s issue was a great success, but there have been a huge number of requests for the whole back catalogue to be made available in print too. Printing a magazine is an expensive undertaking, and volumes bought need to be significant if doing so is to be affordable for the publishers. So the team at The MagPi have launched a Kickstarter, aimed at bringing out the whole back catalogue as a bumper pack, with a swanky binder; the Kickstarter is there partly to raise the necessary funds, and partly so they can assure themselves that the demand is there for printed copies in the future and look into some other plans, like translating the existing magazines into other languages, and exploring new kinds of content and new kinds of distribution.

There’s some valuable content in there, and I challenge you not to be inspired: hardware projects galore, enormous lists of games and other software you can download onto your Pi, along with courses in Scratch, Python and C: with only the MagPi and no other Pi experience, you can go from knowing nothing about computing to building a robot or automating your house if you work through all the exercises and articles.

Please pledge something to the project via their Kickstarter – and if you can’t afford to do that, please think about volunteering for The MagPi. They’re always looking not only for content creators, but also for designers, educators, administrative support, typesetting and editorial help, and help with all the other less glamorous bits that come with making a magazine.

We at the Raspberry Pi Foundation couldn’t be more grateful to the guys at The MagPi, who have dedicated huge amounts of personal time and effort to making this community what it is. We hope you, like us, will support them in making The MagPi even bigger and better in 2013. 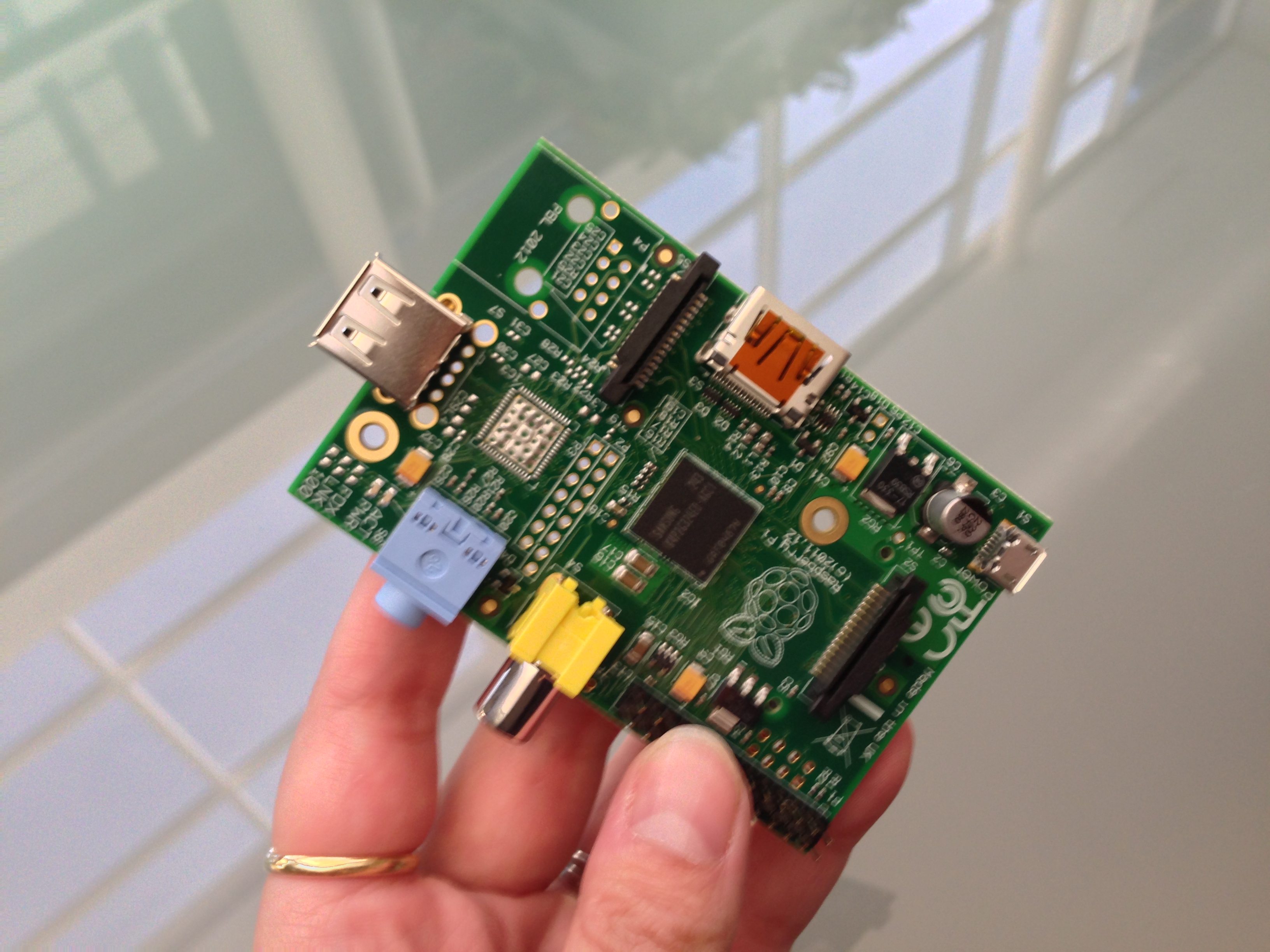 First Model A samples off the line!

Issue 6 was available as a printed mag, and we were promised issue 7 printed too but it never appeared. I watched modmypi for it to appear, never did.

I will go and pledge at kickstarter now.

From the Kickstarter page the BUMPER PACK also includes a limited edition binder, MagPi stickers and free shipping in the UK! For £25 that sounds like a bargain to me!

To keep the resale costs for the printed magazine as low as we would like, we need to sell quite a few magazines. Following issue 6, we decided that kickstarter was the best way forward as Liz explains in the blog post.

Would id be more economical to only print collection in a 6 month to 1 year time frame? That way schools could have printed reference to file in their library.

Also has anyone looked into converting the html version an epub or mobi? That would make it easier for people to read on ebook devices, maybe even sell a subscription for Kindle/Nook devices to help cover distribution costs or just let those companies have it for free as long as they don’t charge too much for distribution.

I’m afraid I am still not able to help in this matter or I’d ask for the source files and give it a try.

epub and mobi have been looked at, but require more work at the moment.

The target is sort of reached but not the number of pledges that they are looking for. On the kickstarter they state “Our single biggest risk is that we do not receive the minimum quantity of 250 pledges for the MagPi Bumper Pack.”

You are correct Andius. We need 250 backers of the MAGPI BUMPER PACK and above to be 100% successful so keep spreading the word. But we have hit our financial goal so no matter what happens now we are printing magazines. We are very excited and a big thank you to all our backers.

Well done guys on this, looking forward to the day when the mag is in my mail box every month. Don’t give up, it will work.
Nige NZ

From my point of view you cannot put too high a price on the quality of learning, education and fun that I have gained From the RPi. After leaving school I had a career in engineering for 13 years before moving into education I have found the inventiveness associated with the pi as amazing. Well done everyone!. I have pledged on behalf of my 12 year old son, to give him his on start in a possible future career, or if not a doorway into a world inhabited with like minded supportive people. It will be a surprise to lighten post Christmas blues when he receives his own pi and pi mags in January. Keep up the fantastic work all. Best Regards, Lester.

Fantastic! Stories like this are really great to hear.

We hope you enjoy using the mags together. And if you are able to spread the word to your son’s school/friends etc. we would be extremely grateful.

Thanks for your support.

Well I gave the project a kick since I am one of those crazy people that likes a print copy. Now to try and wait patiently for the goods to arrive and have 114* more people give a kick to Bumper or higher.

Good luck with getting enough kicks to see this through.

*Accurate at the time I posted this.

Nothing crazy about that; I love a print copy too. Especially if you’re reading something in a way which requires you to follow closely, nothing beats it. (And I say this as someone who simply doesn’t understand how she functioned before the Kindle.)

Agreed…I also find it frustrating having to type in code by switching back and forth between windows (could copy and paste, but that is a bad way to learn).

Having the paper magazine in front of you is a massive help!

A lot of learners (myself included) find that the discipline of actually writing something down, or typing it, fixes it in the mind. Copying and pasting’s a disaster for learning languages; typing and exploring where you’ve made errors or can change variables cements what you’re doing in your memory, and a paper listing is perfect to help you do that.

I find learning spoken languages is much the same; it’s much easier to remember new vocabulary and grammar if I can see it written down and then copy it out. I know that kinetic and visual learning is also important, but for me, writing stuff down wins every time.

Definitely agree – I have been doing a Coursera course to learn a bit more Python, and I have to watch the tutorial videos on my TV with my laptop handy.

I then pause it LOADS and type in all the code they have written and try to work out what is actually going on…you can’t learn things like that only by sight.

It also quickly makes you remember things like putting a semi colon at the end of a line of PHP/CSS etc etc once you make the same error 200 times in a row!!

Added my £25 contribution for a bumper pack. Its a brilliant magazine and deserves to be supported.

Thanks a lot for your support! Keep spreading the word.

Claim to fame: I was the 250th backer !
Not yet received my Pi though….! (I think the order got lost, and the long wait was kind of expected. Met someone who had already received theirs AFTER I ordered mine, so re-ordered!).
– Paul

That is a great claim to fame! Hope your Pi turns up soon too.