Dom’s been streaming 1080p video from the camera board (this time using a blu-tack mount – you’ll be pleased to hear that proper camera mounts will be available so you won’t have to use whatever sticky stuff you have in the kitchen drawers), and he’s filmed the streaming process to show you how well it works.

He’s used a camera to film what he’s been doing which is rather less good than the RasPiCam itself – so he’s also sent me the raw video output so you can see what it looks like straight from the Pi. You can find the .mkv file here – it’s well worth a look if you’re curious about what you’ll get from RasPiCam. While you’re busy downloading it, you can see Dom’s wobbly cameraphone output below, with an explanation of what you’re looking at.

TechRepublic: Inside the Pi Factory 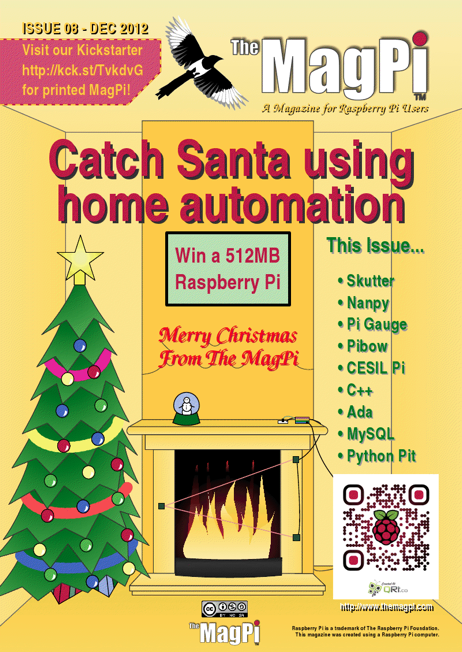 The MagPi issue 8 is here - support their Kickstarter!

This is very exciting for me so I know your friend Dom is very impressed with this. Keep up the great work and thank you for continuing to want to develop stuff for the raspberry pi!

Dom’s doing much of the development work on the camera board – and we’re very impressed with him!

The mkv file is a little “grainy”. But the overall quality is good.
Maybe I can use the Pi as camcorder. I have to put a screen to watch what I am recording, and a USB HD.
Or it would be better send the data by wifi and record it in a remote PC?

Congratulations for the improvements.

The “grainy” effect is due to indoor lighting.
Outdoors, or with better lighting, and you’ll get less grain.

Grain==noise, for those who are wondering!

Ah, but we are silicon people! In low light the noise that is inherent in the sensors becomes more noticeable as all the signals are lower – basically the signal to noise ratio decreases. So low light always means more noise, and this is increased further as you increase the gain (either in the sensor – analog gain, or in the ISP, digital gain). The GPU has a hardware block that does denoise that can be tuned to increase strength as light levels decrease (as gain increases), but you do comes up against some limits! This sensor hasn’t been given a thorough tuning, so there are bound to be some areas that need improving. Noise is probably one of them, as is the AE. This is the sort of stuff that means it takes man years of work to get really high quality images out of a sensor – the Nokia N8 and 808 took quite a few man years each.

So what other circuitry is on the camera board? Looks like pads for a switch on the front? Is the rest of the space just taken up by power supply and LVDS line drivers?

Everything on the LHS of the shown PCB will be removed for the final production version.

Are the camera boards going to be available for Christmas?

Don’t think so – we’re expecting to have them ready very early in 2013.

Would we get a peek at the display before Christmas though?

Worth a shot :P

Very exciting. I’ll be following this for potential use in a project in which I’m seeking to make a low-cost (and possibly portable) eye-tracking system for research.

Looks good, is that the auto white balance going funky in the first part of the video when he’s waving?

We’ve only recently got this working.
I’m sure a bit of configuration will avoid the AWB jumps.
James may know more about this.

Not complaining at all, I assumed it was just a tuning bug. I appreciate the response and all the work that has gone into getting this to market!

How will the camera mount work? I presume this will attach to the PCB somehow, and so will it only be compatible with the newer boards with the mounting holes?
It would be great if you could construct one that attached at the edges, or perhaps to some of the sockets, so that those of us with the original boards can also use it without having “to use whatever sticky stuff [we] have in the kitchen drawers”!

You will get a strap ~150mm long at the end of which is the camera. The camera will then have to be mounted independent of the Raspberry-Pi board.

Not before the end of the world! :D

I reckon a wide angle lens adapter would be a really nice to have addition to make the RPi+Cam a good Action Cam.

why is it when he is waving, his shadow is out of sync with his arm?

One of the ‘shadows’ is the reflection of his arm on the glossy laptop screen, hence it is a few seconds ahead of the video off the Pi.

It is great to see this working and I will look forward to adding one of these to my Pi, when available. For showing off the camera at its best, I suppose you would want a bright outdoor scene with the noise reduction minimized or off.

Dom’s a bit of a night bird – plus he lives in Cambridge, so the likelihood of him being in a bright outdoor scene before next summer is low.

I am in Brazil and it is spring here. Send me a camera board and I will record a bright day tropical view :)

This may be more of a OmniVision OV5647 camera question – but I couldn’t figure out this from their spec sheets. Can I use this for IR work in the way that I see instructions for other digital cameras (remove the IR filter, replace with an old film negative). Or is the way that this is packaged make this sort of modification difficult?

Remember it’s basically a cellphone type camera, tiny and integrated. Taking it apart would be micro-surgery. Maybe possible, but surely not easy. If the IR filter is bonded to the sensor chip, I’d guess it would be nearly impossible to remove without damaging the sensor.

Wow, This looks great!
Can`t wait to get one for my hobby car surveillance project :)

This may have been mentioned in the forum but I am unable to find out the exact answer.

Is it possible to use the software to be provided along with the camera board for a USB webcam? I understand that the data paths are different, but what about the H.264 library and API?

will raspi be capable enough to do google talk (1 to 1) session with video on both sides?

No sound :-(
You could add a USB sound input but the synchronisation with the video will be off.

Thanks so much for all the samples, feedback and documentation on your project. It’s very exciting to see this and I’ve spent all afternoon researching!

Is there any plan for a camera card with audio input? Also, does anyone know of a way (similar to SMPTE or JACK Sync) to sync the video and sound from two seperate inputs on the RPi (the camera card and whatever audio input) to the same clock? A Linux solution for this?

I’m a technical manager for a medical simulation center and I use a lot of different audio and video solutions and I’m very interested in open source and open architecture projects that I can customize and bundle to create AV solutions for schools and other institutions that have little or no budget.

Is it just me or does Dom look a little bit like Luke Skywalker in this vid???
Thanks for the great work guys!

We should audition for a Foundation Han Solo. I, of course, will fill the role of Darth Vader.

I volunteer as the Foundation Chewbacca (well once my beard and hair grow back). Well Chewbacca or Gandalf :)

This is all very good news despite the noise etc.
Noise issues are universal for most current video sensors no matter the manufacturer, quality or cost, so realize it’s not just this model. The key to better quality video in this case is better lighting as Liz stated.
Dom was doing a proof of concept with the wireless that seemed to be working rather well. I didn’t see frames dropping or many blocking issues with the compression. The problems that show up at the 6-second mark in the .mkv file seem to be with auto white balance causing a delay. Also the white balance changes at the 6-second mark from a greenish yellow tone in the highlights to a blue at 6 seconds and then back to the greenish yellow at 29 seconds when Dom waves again.

Controlling the lighting situation will also remedy the AWB and other issues for the most part. Keep in mind that kids are going to use this inexpensive camera in ways that we cannot yet imagine. Having white balance, iris, aperture and shutter issues are typical and they’ll either address them or not on an individual project basis…

On the programming side, I hope that users will be allowed access to some of the hardware calls including shutter speed, iris, ISO, etc. Also consider giving us access to the video signal both pre and post compression! In any case this is going to be such an amazing addition to the RP.

This raspicam could be the “cat’s meow” for some of us! I mentor a team of high school students who are building their third submersible ROV as part of a competition here in the States. After learning of the RPi at Maker Faire 2012 in New York this past September, my team has decided to embed a RPi (or two) on their machine to control arduino shields to operate the thrusters, tools, and sensors. We are quite excited to put a RPi underwater and hope to use the raspicam. Thank you all for your hard work getting this ready and especially getting it to market at such a low price!

Our question is, are the specs of this camera available yet? We’re are interested in the lux level as light diffuses quickly underwater and low lux cameras tend to work better.

Nice, now all we need is a mic

will it wotk with the great OPENCV LIB?
NAD

I am very keen to get my hands on one, is there a way I can get a mail when released? Been waiting since it was first announced … Feels a long time ago. Am very excited about this!

Will the camera board be programmable ? I’m especially interested in the ability to transfer raw, uncompressed frames from the sensor rather than H.264, changing the electronic shutter speed, scan line imaging… etc.

Received mine yesterday and quickly realized I needed a way to mount it. Otherwise, it flops all over the place. I made one from a couple spare things I had lying around – a male RCA to 1/8″ phone plug adapter and a 5″ piece of insulated 12 gauge solid wire. I glued one end of the wire in the 1/8″ end of the adapter and hot glued the other end of the wire to the side of the camera board. Needless to say the RCA end plugs into the RPi video jack. The wire can be easily bent to aim the camera as needed and is plenty stable.