I’d thought you might have had enough of details about the factory process that builds your Pi by now, but it seems I’m wrong: we’ve had lots of requests for video of how certain parts of the assembly work since Pete’s post describing how the Pi is made went live at the end of last month.

So here’s some home-made video showing you what goes on on the production line. It’s worth watching this alongside another read of Pete’s explanation of what’s going on. Some of the pick-and-place robotics is a bit hard to see – we had to film through a safety hood – but there’s lots of fine detail here which we think you’ll find really interesting. 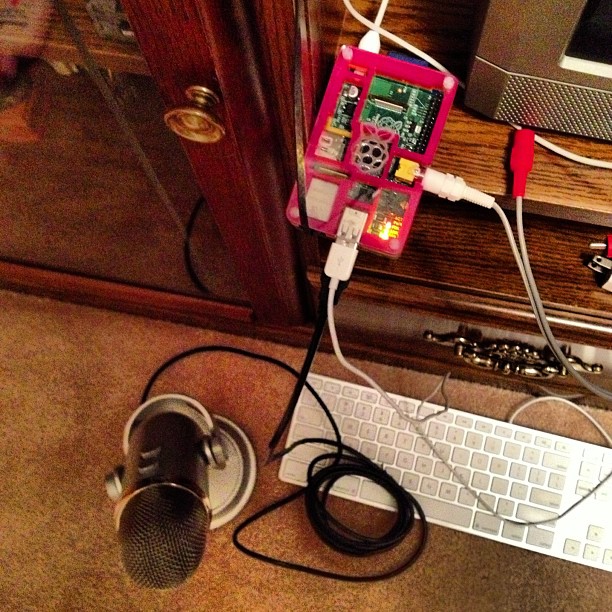 Humm, I Think that I will go and eat some more fruit.

Loving the music (and of course the production flow!)

Happily for us all, no.

when Eben sings cats from miles around come to listen

who did this song?

Its “Everything is Fresh Today” by Frank Hodges, a 1930s novelty record banned by the BBC because of the lyrical content…. ;-)

Spike Milligan did a sketch based on it in the “Q” ( http://www.youtube.com/watch?v=p-IU-NQ8c14 ) series (an early one by appearances!)

Most annoying music, ever.

Then again, the video in it self was awesome.

I’m really impressed. A more spruced up video of this production line would (probably) be quite useful to Secondary school Design & Technology students to help inject some interest and current technology facts into the ‘Systems and Control’ element of the course.

What does the red dot on the CE/FCC logo stand for?

I was actually asking Richard at Sony about that last week: you can see the lady at the end of the video applying it. When the line is running with reduced personnel (as it was on the day we filmed this) because it’s night time or a day of the week the line doesn’t usually run, the blob is applied to confirm the final test has been done. It’s only on those boards; not all of them will have it.

I like the tune, haha! Made me think of the phantom raspberry blower of old London town. Thrrrrp, oi I want a word with you! The two ronnies wasn’t it?

I really enjoyed seeing this, thank you very much for posting it! I would be happy to watch more videos along this line. Don’t take this the wrong way but if anyone does take the time to do another one, I believe it is worthwhile to try a different camera. This production line is a work of art and I want to admire all the details, but some features like the highlights on the rolling solder wave look highly compressed. I will admit to being a camera snob as I used to do video production full time.

We hear you! We were a little taken by surprise; we hadn’t expecting to be taking video on the day, so ended up using Pete’s stills camera. The good news is that last week we were on the line with a crew from CNN; their segment will go live around Christmas, and we’ll publish it here.

Good to hear! I will keep my fingers crossed that they spend some time on the details. Maybe it’s just me, but what little TV I’ve seen in the here in the US seems targeted not only towards a low grade level audience, but one almost determined to avoid scientific or technical understanding.

Informative, Educational, and most of all very, very entertaining, a real tonic for a cold dark evening.. thankyou

Thanks for posting this. That music really makes the video. Will it be on the official Raspberry Pi soundtrack?

When are the boards RoHS tested?

You don’t need to RoHS test every board. RoHS testing was done right at the start of the manufacturing process (in Sony’s case, back in August, but we had to do it in February too for the other factories). It involves smacking a few boards with hammers and testing the resulting dust.

Hammers sounds a bit extreme couldn’t you have just used XRF as this would as an NDT.

When I say “hammers”, I am eliding the process somewhat. ;)

Liz – my hat’s off to you for pairing the perfect song to this video! :-D

Actually, after that earlier post, I skulked around on YouTube for videos of pick and place machines in action, although none of them had the “solder wave” that’s in this one. Thanks for the video follow-up!

I hope this isn’t news, but some users are reporting problems with the USB? http://hardware.slashdot.org/story/12/08/24/2228251/serious-problems-with-usb-and-ethernet-on-the-raspberry-pi

There’s a bit of a history there: the guy who submitted that story (it’s an old story) was banned from our forums for trolling (as you can probably gather from reading his subsequent posts in the Slashdot thread), and took his frustration out on us by going to Slashdot and some other forums with some rather hyperbolic complaints. A very few USB devices aren’t compatible when used in certain ways, but the vast, vast, vast majority work now – USB work’s been ongoing since February, and it’s pretty tight now. We aren’t seeing any substantive complaints about the USB stack now, although this wasn’t the case a few months back.

If you’re interested in the history of USB on the device, head to the forums; our devs (particularly GSH) report on most of what they’re doing there, and it’s an interesting read.