On the road back from Wales this weekend, we listened to Liz’s Playlist for Driving Long Distances. Gary Numan’s Cars came on. (I am nothing if not literal-minded.) We started talking about the incredible depth and complexity of a lot of 80s music; and how the discipline of only having a limited amount of polyphony and a limited number of tracks brought about music that was, when at its best, so tightly and elegantly arranged that it keeps all of its impact today.

Cars was recorded using only four synth tracks (three monophonic and a Polymoog, I think, having just listened again – but I’m ready and willing to be corrected!) and a real live drummer. Held up against your high-falutin’ Reactables with billion-note polyphony (note: I have no idea how much polyphony is available on a Reactable, I’m just guessing) and clever-clogs plastic brick interfaces, Gary Numan knocks it out of the park every time. I spent the 1980s listening to the Pet Shop Boys – actually, I seem to be spending the 2010s listening to the Pet Shop Boys too – Erasure, New Order, Soft Cell and Depeche Mode, all of them engineering their music within technical boundaries that’d make some of today’s musicians run away and hide under the piano in horror.

Turns out, of course, that I’m not the only person with a Pi and a terrible and burning nostalgia for old synthesisers. Some of you, though, have actually done some work on this stuff rather than, like me, sitting around and thinking idly about it. There’s far, far more functionality available to you with a Pi than there was with an 80s synth, but the fundamental feel of the thing can remain the same with some considerate engineering. First up, here’s Marc Girard’s TronPi.

The TronPi is a Mellontron Emulator based on the 35$ Raspberry Pi computer. It has the 4 classic Tron sounds: Choir, Strings, Brass and Flute. The TronPi is controlled with a standard USB/MIDI Keyboard and doesn’t have any perceptible latency.

All the audio in this video was taken straight from the Raspberry PI’s audio output, no further processing was added to the source. It’s straight out of the computer. The reverb ambience you hear on the recordings is built in the sampler and adjustable.

Back in Blighty, Phil Atkin has been working on Piana for about a year now. We featured it here last summer, and Piana has made some appearances at Raspberry Jams. Since then, Phil’s done more work on the project, and has produced this video to show off how far it’s come.

And earlier this week, I was sent some more video by Servando Barreiro, who has made a Pi-based Looper: a sort of polyphonic Korg monotron. He’s using Satellite CCRMA, a platform designed at Stanford University for embedded musical instruments and art installations – check out their homepage for a download, examples and ideas for getting started on your own project.

Here’s the Looper in action. Feel the depth and warmth!

You can find out much more about the Looper and see (and hear) more video at createdigitalmusic.com – CDM is a great resource if you’re interested in this stuff, and you’ll find lots of inspiration and ideas there.

There’s enormous education potential in electronic music too. The Raspberry Pi Foundation is currently working with Dr Sam Aaron, a researcher at the University of Cambridge, on Sonic Pi, an experimental school curriculum for teaching Computing through digital music. Kids use the Pi to build synthesisers and create music – acquiring a range of fundamental computer science concepts and basic programming skills while they’re not looking. We’ll have much more on that project at a later date; it’s a prime example of our concept of Computing as a creative subject which appeals to the kids who prefer to hang out in the music department and the art block just as much as it appeals to the kids we tend to treat as the usual suspects.

If you’re working on a musical project with a Raspberry Pi, give me a shout at liz@raspberrypi.org. We’d love to hear about what you’re doing. 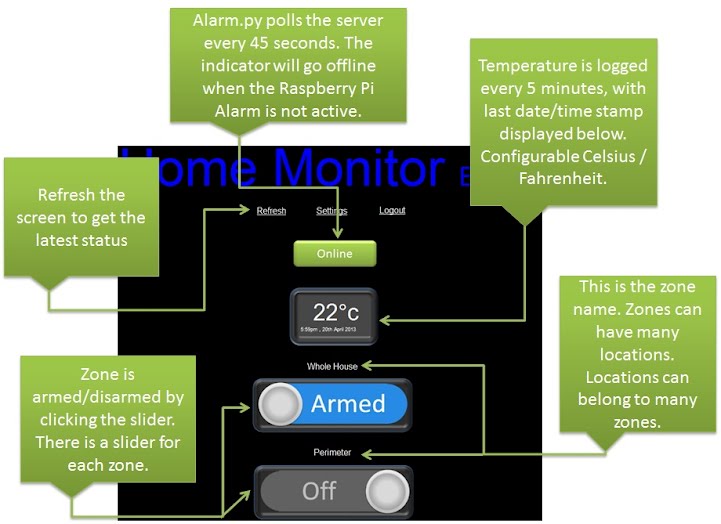 One of the best Pi-related projects I’ve seen on CDM recently was Analog.a.la.carte, which lets you enter patterns to be rendered on hardware synths. The creator’s currently got it set to a Microkorg (meh) but they have more interesting things, too: http://createdigitalmusic.com/2013/06/web-connected-analog-synths-render-sound-from-your-browser-remotely/

Ooh, fantastic – I think I missed that altogether! Thanks for the spot.

Somebody DM.
Say no more

Majority of 80s music was completely awful and synthesizers were the number one culprit. Only the poor sods who were forced to live through the 80s in the prime of their youth now retrospectively give it any credit. Showing your age Liz. Next thing you’ll be crediting 80s fashion instead of deploring the almost-over-thankfully cliche cyclical revival.

I had a red velour jumpsuit. It rocked.

you are not THAT old. Pangaea had already split when you were a young whippersnapper. Although your school lollypop lady was a T-Rex

Actually, he was a lovely old man called Mr Murray. He entertained us every day by allowing us to ask what flavour the lollipop was and giving answers like “scabs”.

I am glad I grew up in the 80’s. I almost feel sorry for the kids now having to make do with some of the dross currently available.

Hello?
Guess you had to be there.

I’m too young for 80ties music but there is definitely something about the synthesizers back then and the limitation of technology – having less options made people use things in any creative way they could. Today, you just click trhough the presets of some synth plugin, it’s all polished, over-effected and oh-so-boring.

For quite a number of 80ties music pieces, I can guess the synth model only from listening to the music. (I owned a number of those old boxes, and I still use a Juno 106 on a regular basis.)

Still, using the Raspberry Pi as a synthesizer platform would be simply incredible. So much bang for the buck! But then again, there are hardly any reasonable software synthesizers in the Open Source landscape, so I’m not too optimistic about this.

WOW – Love the Pi-Mellotron. For those who don’t know quite what a Mellotron is, there’s an explanation here : http://www.youtube.com/watch?feature=player_detailpage&v=ajGdNTFxRy0#t=58s . Must have been a roadie’s nightmare!

Oh, now that’s VERY good to hear. Thanks for letting us know!

With all of the NSA-sellout domains now blocked on my end as a boycott measure, I sure wish more had been written, or some audio was available.

As it stands, I doubt the audio compression used in YouTube videos (or anything MPEG/MP4 not set to the finest settings possible, if even that) will do the sound justice.

Any chance you could make some raw PCM .wav samples available? That’s really the only way an audiophile can appreciate a digital work. MPEG blurs the sound too much.

Use higher bitrates on your mp3 and you won’t be able to tell the difference.

Just as long as your mains cables are made from oxygen-free solid silver and the original source for your digitised audio was an extraordinarily expensive Scottish record deck played through a valve pre-amp (or some other analogue audio quantum fruit-loopery).

What screen is that using? It looks quite good!

Found it – appears to be http://www.amazon.co.uk/Camera-Monitor-Support-Rotating-Screen/dp/B007SLDF7O (cheapest shipping from the UK). Just bear in mind you need to solder your own power connector!

I would love to try TronPi, but I can’t find the download page, if it’s available for download at all. Liz gave a link but it’s for the author’s homepage with no mention to TronPi. Am I missing something?

WTF?
How about posting some info on how to get the PiMelltron setup????

How did you know that I built my very first monophonic analog synthesizer in 1972, a Radio Electronics cover-featured Paia kit designed by John Simonton in, of all places, Oklahoma City (it used black and white shirt buttons for the key-tops!)? During a cross-country move, I was able to visit John in 1976 at his suburban family barn/studio/factory (the barn was there long before the surrounding subdivision) before he later unfortunately contracted and succumbed to cancer in the 1990s.

I was bowled over by Wendy Carlos’ “Switched on Bach” in 1968 – it showcased the magic of 24-track analog tape recording and a huge monophonic Moog Model III system. Wendy also composed, arranged, and performed the soundtrack for Stanley Kubrick’s “A Clockwork Orange”, along with the “Sonic Seasonings” album that rendered a year of the seasons in unbelievable soundscapes, among many other examples of acoustic gold bullion. I got to meet Bob Moog at the last Acoustic Engineering Society he attended before passing away from cancer a few years ago – what a fantastic acoustic electronics engineer. His circuit boards are nearly indestructible works of art.

Let’s not forget Kraftwerk’s hypnotic “fun, fun, fun of the Autobahn” (they’re still performing and released a new album recently, IIRC). Then, there’s Keith Emerson’s tour de force (literally – two Moog Model IIIs on hydraulics that were alternately repatched/reset below the stage between songs) as the keyboard wizard along with vocalist/guitarist Greg Lake and percussionist Carl Palmer (calling him just a drummer is ridiculous), as Emerson, Lake, and Palmer. Oh, what a Lucky Man he was, indeed! We can’t forget Dick Hyman’s over-the-top, tongue-in-cheek Moog-inspired album, “Electric Eclectics” – you need to listen to it in its absurd entirety before peeling yourself up off the floor. BTW, probably the most famous champions of the Mellotron were The Moody Blues.

I need to try Columbia University’s Java-based JSyn virtual music synthesis library on the Pi. If it’s not already byte-code compatible, it should just be a recompile to armhf. Hardware floating point is not an option as JSyn not only supports voices and effects limited only by virtual memory size, but also does spatial synthesis to account for performance space ambience. I’m going to need something like Jsyn for sound in Pi-finity!, the long awaited blockbuster/brain-fart STEM game system coming soon to a Pi near you. So much Pi fun, so little Pi time … :D

Keith Emerson … I had the pleasure of hearing him in The Nice – P P Arnold’s backing band.
Apart from falling in love with P P, what I really remember is Keith sticking a drumstick in the back of his Hammond

I had a PAiA 4700, which I much expanded with home-brewed copies of John’s modules (and a few of my own). Later, I got one of their FatMan synths and finally a 9700.

Apparently I fail at BB code. I can haz preview or edit function?

Should be “I’ll just leave this here!”

The DIY Synthesizer community is alive and well.

There is the synth-diy email list for the more technically minded.
Online forums at MuffWiggler and ElectroMusic Forum.
And later this month, on the weekend of 26th-28th July at Robinson College, is the annual Cambridge Synth-DIY weekend event where anyone with any interest in old/new/home-built/commercial synthesizers and other electronic musical instruments can come along and join the fun. We even have a raffle to raise money for the Drake Music Project.

Where can we get the TronPi?
I looked into using my pi for synth but then ran into latency issues and the problem that I could only play 3 notes at a time (using yoshimi). I’d be interested to know how marc did it, if I can’t get it myself :P

What is the software called? The sounds are heavenly.