Liz: Here’s a guest post from our friend Dr Andrew Robinson at the University of Manchester, who has been leading a team of undergraduates this summer (most of whom seem to be called Tom – hi, Toms, it was a pleasure to meet you) in developing school projects and materials around the Raspberry Pi. They’ve got big plans for the coming months, including a contest, more schools outreach, festival appearances, work with kids and some fun with a Raspberry Pi-enabled birdbox (which had its very own table in the pub here in Cambridge when they last came to visit). Over to Andrew, who will explain a bit more about what they’ve been up to.

At the School of Computer Science at The University of Manchester we want to get more people interested in computer science and using Raspberry Pi. As such we’re launching the Great British Raspberry Pi Bake Off, a competition to get people making projects with a Raspberry Pi. We’ve also produced some example projects and sample worksheets to help people get started.

The competition has categories for under 18s and over 18s so everyone can enter, and they’ll be loads of hot tech prizes to win! We’ll make an official announcement soon on our competition page with the full rules.

We’re very lucky to have some of our talented students working for us; they’ve been paid to play – sorry, to develop – with Raspberry Pi over the summer. How cool is that? They’ve produced activities that teachers will be able to use in the classroom, but more importantly, that are really fun. You’ll be able to try the activities yourself at the  Manchester Science Festival – we’ll be publishing more details soon.

Our Raspberry Pi bird box is the result of one of these projects. It’s got light beams that detect when a bird enters or leaves which then sends a message so you know to look out your window or it will take a photo. We’ll be adding other sensors for temperature, weight, etc. and combining these with image recognition from the camera to get some data mining going.

We want lots of people building their own nest boxes all feeding data back to bird mission control, a central webserver where you’ll be able to monitor bird activity across the world in real time! Using our Python and Scratch libraries with our hardware interfaces, even an absolute beginner can get something going in a matter of minutes.

With the help of MOSI and STEMNET we’re supporting teachers and STEM ambassadors to take Raspberry Pi activities into schools. The first sessions booked up in 3 hours, so we’ll be scheduling more soon. We’re developing activities that bridge the gap between what kids are interested in, e.g. nature, music or crafts; and computer science.

So, how can you join in the fun? Get your thinking caps on for a project to enter in to the bake off. Full details will be published later in September. [Liz: we’ll be publicising them here when the guys in Manchester are ready.] If you’re a teacher or group leader (e.g. Scouts) then get in touch if you’re interested in knowing more about our worksheets, or want to come to one our sessions. Just leave your details on our website. We look forward to hearing from you! 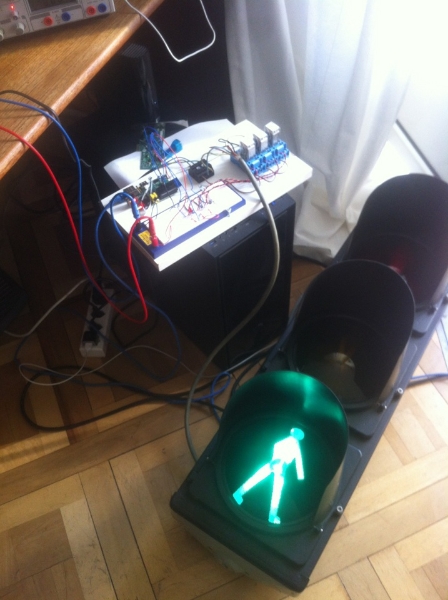 “if you’re a teacher of group leader (e.g. Scouts)” I think that was meant to be “or” instead of “of”, in the last paragraph.

Love all this stuff. I was chatting with a synth legend kind of guy today who told me Vince Clarke – one of my all-time musical heroes, and also synth legend – still composes *everything* on a BBC Model B. So my mission is to transition him onto a Pi, and have him be using it exclusively in 2042 … let’s see whall we?!

Now I’m not sure what the relevance of my comment is – it was clear as I started to type, then vanished … but I think it was about, if we can transition the yoof onto these wonderful things, a few of this generation will pick them up and run with them, and *incredible* things will emerge, and will keep emerging for decades, because the platform is potentially highly disruptive.

That’s sort of what I was thinking, but it all came out as a random synthesizer-based comment on an education-based post!

Blimey! We’ll have to get that RISC OS port finished so he can use BASIC, I guess…

I’ll definitely have to write him a sequencer …

Any idea where to get the full hardware and software instructions for making the birdbox project please?- I’ve looked on all the PiFace and related sites and can’t find anything anywhere.

To make the Birdhouse
can use this information ….
Laser Cut Birdhouse:

We used a shopbot CNC to cut the bird box out — we’ll try and publish full details once we’ve tried them out at a few workshops. Drop us a line through the contact page and we’ll email you details when we have them.

Thanks Andrew, I’ve messaged you through the PiFace website’s form.