…and we could hardly mention Elite without mentioning Elite: Dangerous.

Over a quarter of a century after the original, David Braben of Frontier Developments has launched a Kickstarter project to develop Elite: Dangerous, the next game in the Elite series. If funding is successful the game is planned to be released on the PC in March 2014. There’s a huge amount of information over on the Kickstarter page, so if you want to see this happen (we do!) or even have a planet named after you then head over and see what all the fuss is about. I was always rubbish at docking

Note: Mr Braben is also co-founder of a charitable Foundation that produces small, fruity computers. But we’re not bothered about that (I don’t think that the idea has legs myself).

I don’t think that I’ll be able to top the news of Elite: Dangerous easily so I hereby declare Raspberry Pi Gaming Day closed. Which is lucky because the 24 hours are nearly up.  A huge thanks to all of the contributors — there really is some fantastic stuff going on out there. We must do it again sometime… 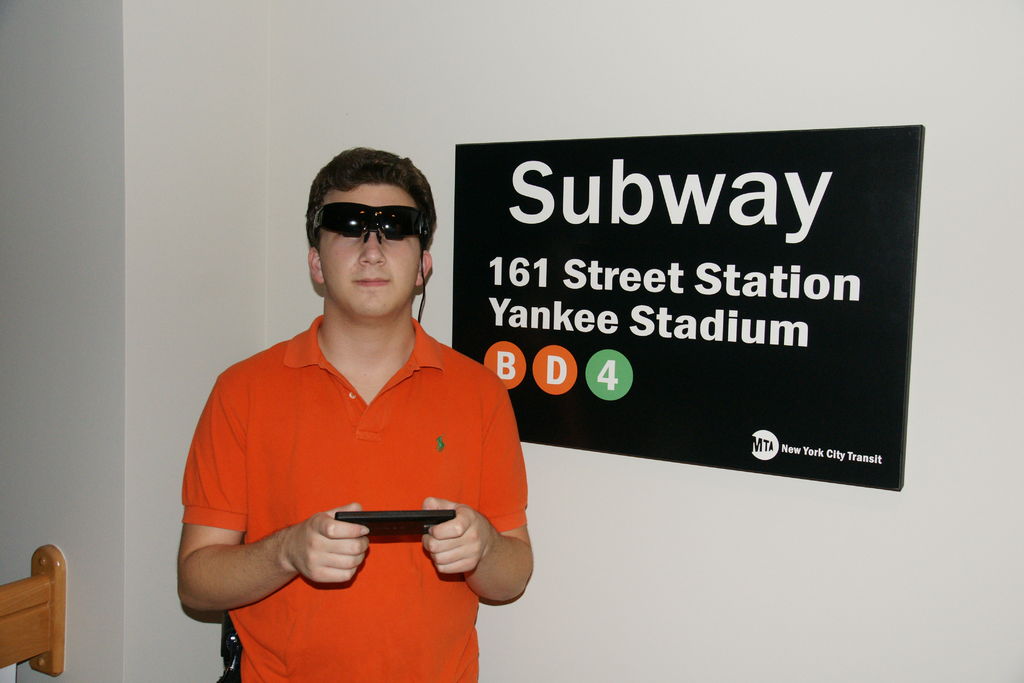 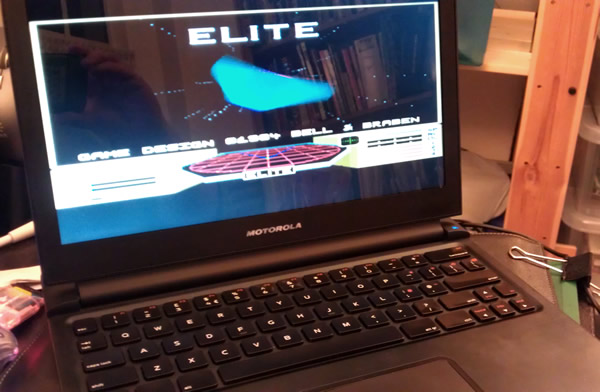 How to play Elite on the Raspberry Pi

Clive, i dont know if this has been said in other reply lists but your writing style is leaving you dangerously open to Liz asking you to take the helm from here on. Not that i mind.

Clive’s been looking for a new challenge since he finished the third book in his ’50 Shades of Dulux’ trilogy.

I did it too. I hope to play in elite-4 in the near future

will this be like googles pac-man doodle…. every one stops work to play

The Kickstarter version seems to require a PC running Microsoft Windows.
Personally, i’ll wait for a version that runs on the Raspberry Pi and doesn’t require me paying anything to Microsoft.

I won’t pledge if it’s a Windows program. It makes no sense to announce such a project here, in my opinion.
A cut-down Raspberry Pi version (ideally Raspbian AND Risc OS compatible) would make sense, but this… I’ll NEVER go back to that unusable piece of **** called Microsoft Windows. I’m not an ignorant anymore.

Ah, but look under FAQs: “Can you release “Elite” on the (iPhone/iPad/Console/Mac/Linux/Oculus Rift/Raspberry Pi) platform?”

Given we have about the highest performance 3d core on anything that isn’t a PC/Mac or a games console, I think we’re in with a chance there (and I’ll certainly be pestering David about it).

That’s what I wanted to hear! Eben convincing Braven to port Elite IV to the Raspberry Pi… Interesting times ahead!
Showing the Rpi’s potential for commercial releases of alternative gaming projects would be very beneficial! I never skipped a single Humble Bundle and I feel very proud of paying for these pieces of art. Just imagine something similar happening on the Pi.

Eben, please also consider pestering David about a RPi port (RiscOS or Linux+GLES) of the original Elite and any other old & gold games he has the rights for.

“It makes no sense to announce such a project here, in my opinion.”
Why?

I don’t feel the need for any such sanctimony about Windows. Money pledged.

No, but… you can play the old Archimedes version of elite using an emulator on the Pi.
http://blogs.arcsoftwareconsultancy.com/pi/2012/11/13/archimedes_elite/

That solution isn’t very elegant, to say the least. I hope Aemulor and/or ADFFs will put things into place in the near future ;)

What is not elegent about it? I could have provided a zip file that you just download and run – but going through the manual set up process teaches them a bit about RISC OS :)

I find it un-elegant because you have to emulate a full Archimedes system just to run a game that could run semi-natively if the 26-bit program counter it relies on is taken care of. No need to go and emulate a complete system for that. I’ve played this game in Aemulor on the Pandaboard and the experience is MUCH better. No tearing, smoother screen updates, faster, more responsive controls… You just wait until Adrian Lees brings Aemulor to the Pi, and you will see what I mean! :D (PD: I like the Rpi way more than the Pandaboard!)

@ Mr Nuts, yeah I agree – there is a bit of tearing with ArcEm. I look forward to trying Aemulor then :)

This Kickstarter campaign ought to be interesting.
Oh should you like this, a former developer from the Frontier team has its own campaign about a completely different but also very cool game going.

Combines Outpost and Theme Hospital and it could become a very neat game, check it out :P

My first Kickstarter pledge given!!

This charity does wonders for the big unconnected commercial products of it’s members.
Morally skewed?

I know, it disgusts me too. How dare they blog about one of the most highly anticipated games of all time; or about a person who wrote one of the most iconic games ever. And that Braben will actually get paid for it too!

“One of most highly anticipated games of all time”? Oookay.
The Raspberry Pi Foundation is a UK registered charity, so I naturally assumed this site was all about that. Silly me.

@clive LOL :-D
People need to get a reality check here… Elite was always a commercial product that you had to pay for, and originally it ran on proprietary operating systems that you also had to pay for. The new Elite is also a commercial product, and we’re being asked to pay money to fund it so that they can sell it for profit for use on a commercial operating system. If that’s outrageous then fair enough, but nothing has changed since 30 years ago and it’s just as simple as that!

Hi Dave. We had to post that, sorry: when David Braben co-founded the Raspberry Pi Foundation he had it written into his contract that in exchange for his freely given time and support, should the Foundation become really famous they must advertise all of his nefarious money-making schemes on their blog. His rider also says that at all board meetings he has to have a big bowl of Rowntree’s Randoms to himself, with all of the ice creams picked out by a specially trained monkey. It was stupid really — like promising Rumplestiltskin your firstborn child — but they just never thought they would be this successful.

And they can’t back out now: Braben’s Dangerous.

>And they can’t back out now: Braben’s Dangerous.

That makes him seem soooo likable.
*sarcasm off* : )

Dave – I can see now why you are so angry. But you don’t have to put up with it! Simply moisten a Q-tip with water and gently swab the cruft from around that ‘o’ key. That should fix it!

Dave – I can see now why you are so angry. But you don’t have to put up with it! Simply moisten a Q-tip with water and gently swab the cruft from around that ‘o’ key. That should fix it!”

It’s the only way to exaggerate or lengthen phonemes in text. I’m guessing you know exactly how I was saying it.

“It’s the only way to exaggerate or lengthen phonemes in text. I’m guessing you know exactly how I was saying it.”

Phonemes are the smallest, distinct units of sound in a language that convey meaning. They are abstracts: you can’t extend them by definition. You haven’t even extended a grapheme. What you have done there my old son is stuck some extra ‘o’s in to alter the pronunciation. Oooooh!

Having said that, I just thought your ‘o’ key had choked on keyboard smeg and needed a good old scrub.

Did Clive need to put a sarcasm on flag on his post?

Why you you think its morally skewed? What actually wrong with commercial products? You buy them all the time presumably. What wrong with a charity mentioning commercial products that are related in some way? It’s a big world we live in and there are certainly moral issues to be had out there. I’m just not sure this is one if them.

Frontier was probably the first computer game I ever properly played, it was so good! Pleased to be made aware of their kickstarter. To be honest I hope it doesn’t play on raspberry pi, at least not on max settings.

no special reward for a rasperry pi elite original download package? an “official package”extra $25/35 for that…… split it 50/50 foundation and game if you want…… I will support.

I’ll click fund when he offers an “I’d like a Raspberry Pi version” reward/vote. I’m buggered if I’m funding a Windows game on the offchance it might get ported to the Pi one day…

They’re not likely to make a return on it unless they sell it for Windows first. Isn’t that obvious? Or were you hoping the Raspberry Pi version will be free? Well it might be – IF they’re selling the Windows one at full price – there might not be much porting needed, and Braben is sure to want to support the RPi!

No it’s not obvious. I would happily pay (more than for a Windows version) just to see someone develop a serious, commercially viable game for the Pi, and I would have thought this is exactly up mr B’s alley. The Pi may be small & cheap but it has more than enough computing power for the task – an Elite+Pi bundle could do for the Pi what Mario did for Nintendo, and I’m sure plenty of parents out there would breathe a sigh of relief that little Johnny wants a £30 Pi to play games on rather than a £300 PS3.

My first kickstarter pledge too , so many memories…..