Electronics Weekly dropped in to the Pi factory in Pencoed, South Wales, did a lot of filming on the factory floor, and had a chat with Claire Doyle, who runs Raspberry Pi global distribution for Farnell, one of our manufacturing partners. We know you can’t get enough video of the process behind the building of your Pi, and this is, we think, probably the best and most detailed we’ve seen yet. A big thank you to Gareth and the rest of the team in Pencoed for putting up with yet more disruption on our behalf! (Gareth says he thinks he’s seen more film crews since his factory started making Raspberry Pis than he had in his entire career up to that point.)

I’ll be seeing Gareth and the team later this month. Leave a comment below if there’s anything you’d like me to ask them then.

RaspyFi - a distro for music lovers 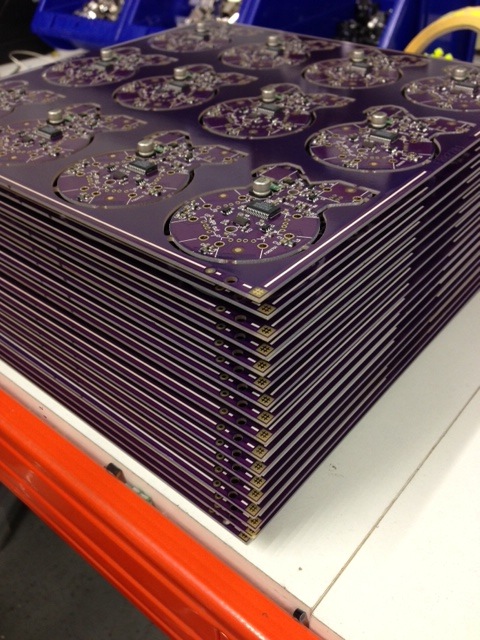 PiHub - a robust powered hub, made especially for your Raspberry Pi

A tiny bit too rough handling for my linking.

Looks a lot better than the Foxconn factory coditions reported in various places. I also wonder: did designers / managers look at the impacts of manufacturing in terms of CO2 in supply chain etc? Consumerism makes the world go… pop? http://vimeo.com/12768578 http://www.youtube.com/watch?v=TFyTSiCXWEE http://www.filmsforaction.org/watch/without_saying_a_word_this_6_minute_short_film_will_make_you_speechless/

Yes – it’s a Sony factory, and they put a LOT of work into minimising environmental impact.

Thanks for posting this one Liz! Much appreciated, and we’re glad you like it.

I’ve told Dave to add the praise to his clippings file!

Best wishes to all RaspberryPi.org!

That is so cool! What other products do they make there?

Their main business is high-def broadcast cameras – the very specialised sort that film sports and other fast-moving, high-detail stuff. They also do some contract manufacturing besides Pi (but the vast majority of their contract work is Pi); last time I was there they were doing a solar-powered LED streetlight, and a laser hair-removal device!

Wow, quite a variation!

Fortunately I don’t have any laser-hairs to be removed ;-)

Great seeing the production process up-close and in high-def.

This link has a good description – http://www.walesonline.co.uk/business/business-news/sony-expand-product-range-pencoed-5843370

You could ask Electronics Weekly what happened to the other ‘r’ in Raspberry :)

I wonder if, as well as increasing the number of video crews visiting them, they’ve seen an increase in their business from other clients?

Question – When is the Rev. 3 board coming as quoted in April when the foundation passed the 500 000 mark?:

“The future is about higher volumes, a second generation Pi [Liz interjects: don’t get your hopes up, folks; Gerald’s talking about rev3 of the original Pi, which we’re preparing at the moment]”

Liz – Ask them what’s the cheapest they could build an LCD monitor with HDMI input for ;-)

That was a well done video. I enjoyed seeing all those Pi boards go together.

Great vid!
Saw someone stickering by hand too, awsome. Could that be printed as well?

I’m guessing those are inspection numbers (quality control), with the number relating to the person who inspected it and the time the inspection was carried out, so I doubt that could be printed onto the circuit board. Usually, quality control inspections are done on a random sample so it’d sort of defeat the object if you could predict in advance who’d do it and when.

Having said that, Liz’ll reply saying the labels are nothing of the sort…

Actually, I’m not sure! I’ll ask Gareth when I see him next.

I love the way the employees look so completely at home and normal, as if manufacturing cutting-edge electronics was no more troublesome than working in a bread factory.

I half expected the Brian Cant or Fred Harris to be doing the narration, and for it to have started with a choice of square, round and arched windows.

Ready to play? What’s the day?

Another hit TV soap opera – “As the Raspberry Turns” :D

Liz – You should see if you can get the folks at “How It’s Made” (http://www.tv.com/shows/how-its-made) to either license these Pi-making videos or come in and do a segment. It’s a completely amazing series on The Science Channel here in the U.S. (a Discovery property from Canada, IIRC) that will bend your mind, even if you’re a seasoned mechanical engineer. It can be mesmerizing watching hundreds, thousands, or millions of everyday things being made (wanna know how they get the fuzz on a tennis ball, or how pencils are produced? It’s usually not the way you would assume).

“How It’s Made” is broadcast free-to-air in the UK on the Quest channel (available on Freeview, Sky and Virgin), and also on the subscription Discovery UK channel.

Aye, I watch the series in the UK as well. Genuinely interesting to see how really really mundane objects have to go through often very complex manufacturing processes.

For example, the football*

(turning the thing back the right side out shows someone who really knows what they’re doing to avoid damage).

Probably some of these have already been answered in other posts, but here are my questions.

How do you factor in the cost of initial setup? Is it amortized over a certain number of boards, or weeks?

What was the initial yield, and what is it now? Is RasPi exceptional in this regard?

What type of growth is still feasable without involving other plants? What percent of capacity are you currently running at to keep up with orders?

In case no one else gets around to answering it, I asked this question because we are planning bulk orders. The answer was that they have enough capacity for now, and could increase it by adding more shifts. However, I wouldn’t be too surprised to hear that they may have to go to that level of production if demand keeps growing at the rate it has since the first boards were made there, along with cameras and who-knows-what-else in coming months/years.

Loved the video. Really wish we could but one of those boards with 6 pi’s still attached – would make for a great PiFarm :D

seems a pity not to be redeveloping the board with other functionality. eg::

obviously not all recipes will sell equally well, but a more interesting process and outcomes might be expected?

Can you show us how the PCBs are made? I know they are multi layer so would be great to see how they a put together!