Liz: If you use Raspbian, you’ll have noticed that Mathematica and the Wolfram Language come bundled for free with your Raspberry Pi. (A little boast here: we were only the second computer ever on which Mathematica has been included for free use as standard. The first? Steve Jobs’s NeXT, back in 1988.)

Earlier in July, Wolfram Research announced a big update to Mathematica, with the introduction of Mathematica 10. Here’s a guest post announcement from Arnoud Buzing at Wolfram about what the new Mathematica will offer those of you who use it on your Raspberry Pi. Over to you, Arnoud!

In July, we released Mathematica 10, a major update to Wolfram’s flagship desktop product. It contains over 700 new functions, and improvements to just about every part of the system.

To get this new version of the Wolfram Language, simply run this command in a terminal on your Raspberry Pi:

This new version will also come pre-installed in the next release of NOOBS, the easy set-up system for the Raspberry Pi.

If you have never used the Wolfram Language on the Raspberry Pi, then you should try our new fast introduction for programmers, which is a quick and easy way to learn to program in this language. This introduction covers everything from using the interactive user interface, basic evaluations and expressions, to more advanced topics such as natural language processing and cloud computation. You’ll also find a great introduction to the Wolfram Language in the Raspberry Pi Learning Resources.

This release of the Wolfram Language also includes integration with the newly released Wolfram Cloud. This technology allows you to do sophisticated computations on a remote server, using all of the knowledge from Wolfram|Alpha and the Wolfram Knowledgebase. It lets you define custom computations and deploy them as a “instant API” on the cloud. The Wolfram Cloud is available with a free starter account, and has additional non-free accounts which enable additional functionality.

Check the Wolfram Community in the next couple of weeks for new examples which show you how to use the Wolfram Language with your Raspberry Pi. 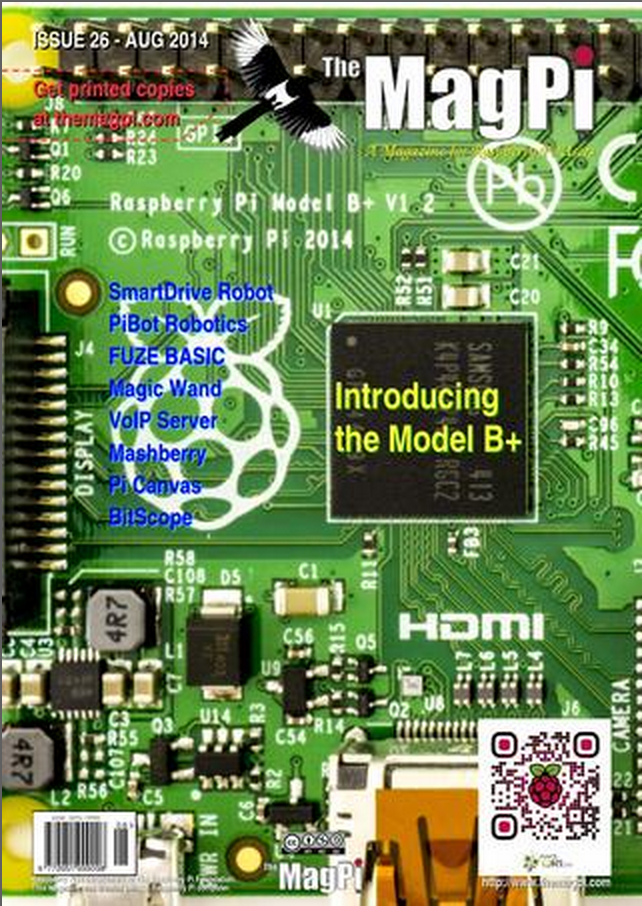 The new version of Mathematica crashes immediately as soon as I press Ctrl+K in order to “Complete Selection”.

The place to sort your ‘Mathematica crashes immediately’ problem … sound’s like a good title for a new topic !?!

Hopefully the next update could be a delta update? It took a long time to get all 232MB and I did it just a few days ago (brought up another pi with an old NOOBs image) and it was 24+hrs. I believe there are libraries for that.

The value of Wolfram’s generosity can not be overstated. I think Mathematica on the RasPi is one of the most exciting aspects of the whole project. It’s a little telling (and sad) that there aren’t more comments for this blog entry. Hopefully its because people in education are taking much deserved holidays.

I would invite anyone with 10 to 15 minutes to browse this site: http://www.mathematica25.com
It was fascinating to me.

My take-aways are:
-The number of places Mathematica pops up in the story of recent human progress is astounding.
-It fundamentally changed what was possible at the educational/research/theoretical level.
-There are a number of things that anyone uses day to day that are the direct result of Mathematica’s performance “in the field”.
-The people that know and use Mathematica, or at least those featured on the site, tend to be older and getting to the end of their careers.

This is before the more recent additions of WolframAlpha, The Wolfram Language, and The Wolfram Cloud.

I just hope that any energy and resources devoted to this part of the project stay in place or increase, at Wolfram and Raspberry Pi. It would be a shame if a perception of a lack of interest side-lined this effort before it can really make a difference. The idea of a generation being schooled in math with Mathematica at their side is truly exciting. I wish someone in a position of power would mandate it.

I’am all for Mathematica and your interest in your own software, but there’s no need to throw your software on everyone.

Personally, i’d like to see this removed from the Raspbian image, decrease the image size for 95% of Pi users who will never use your software.

Users who then want to use your software, can simply paste:
sudo su && apt-get update && apt-get install wolfram-engine && apt-get clean

Actually, I can see that user’s IP address and email – it’s not someone from Wolfram. But that’s a nice bit of paranoia; thanks for brightening our morning.

Oh, I see where you could think that. WMAT are initials related to my family. I do not work for and have never worked for Wolfram or any related entities (pretty sure). I’m just a fan.

I too am very grateful to Wolfram and Raspberry Pi for allowing us access to Mathematica!! In fact, it is the very reason that I have just bought a Rasp. Pi, though I know that I will use it for a zillion other things as well.

The difficulty I have with Mathematica is that I cannot seem to find the shallow end, if indeed there is one.

I am very excited to exporing go Mathematica; obviously it is going to be a lot of fun and I might even dust off some old physics notes for some equations to make beautiful patterns (plotting your own in pencil was always dull).

So why have I not raved about it yet – well, I am bunking off work even by writing this post and there is that Pi remote control receiver to finish.

So chin up WMAT01 – everyone is busy or just having fun with their Pi – quite probably with Mathematica.

Yey, so pleased we’re being kept up to date. :)

Mathematica was the decider for me on whether to get a Pi in the first place. I’d long fancied one, but told myself I didn’t need one and I should be sensible. But once Mathematica was included, I would have had to be insane not to get one.

It’s fantastic to include Mathematica, I teach physics and coding at a London school and as part of the CompSci society we often use Raspberry Pis to investigate principles of CompScience. I received an A+ from Santa yesterday and was thrilled to see those icons on the Desktop after booting into Rasbpian. I will certainly be using it in my lessons next term!