Pimoroni’s first anniversary competition has ended, and the entries have been sifted through: you can read all about the winner (and the entries that got an honourable mention) on their website. Well done all: we had fun looking at your entries with Paul at our birthday party on Friday. (Special shout-out to Sophie, aged nearly-five, who had a really neat butterfly VESA mount idea.) Speaking of that birthday party: And that, dear reader, is why there wasn’t a post here yesterday.

What else? There’s a bit of birthday video we filmed in New York with LadyAda over at TechCrunch; their proprietary Flash player won’t let me embed, but if you click the picture here you can visit TechCrunch for the full horror. And I’ve just been sent copies of the Raspberry Pi Haynes Manual. It’s by Gray Girling, a Friend of Pi who has been involved with the Raspberry Pi project behind the scenes for a long time now. It’s really worth a look; think of the book as a technical manual for people with a little bit of experience who want to learn more. (We’d suggest that kids aged 12 and up who know a a bit about Python and Linux should get a lot out of it – it’s a book that should find a place on the shelves of a lot of grown-ups too.) The book will lead you through projects in software and hardware (scrape web pages! run an X server! get Bluetooth, LEDs and SPI devices running!) – by the end of the book you’ll be gutting a plush toy and turning it into a device that speaks your tweets, and making an MP3 web server. Hearty recommend, and not just because Eben and I wrote the introduction. 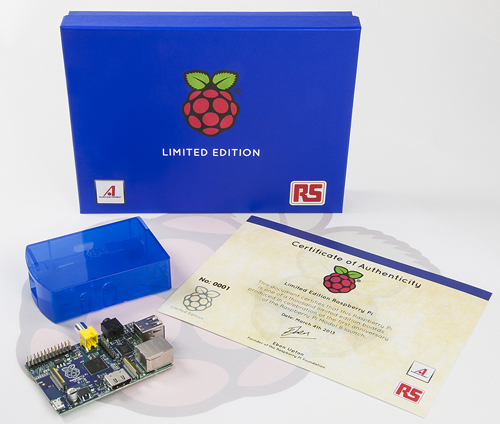 It has been an amazing ride for the last 12 months and the Pi has been one of the first devices that has truly made an impact on my family. My son (Philip – 8) is not only excited about programming but is fascinated by Linux and can’t wait to do more things with it. At the moment he wants us to set-up our own email system using the Pi as the mail server!

Keep up the amazing work!

I cannot wait till this book comes out Haynes manuals are renowned for the easy step by step guides and this is one book thats been on my wishlist since before christmas.

Any chance we can get a table of contents? On the Amazon site, the link to full table of contents only shows a summary and the pictures are too low res to make out (and the zoom feature is showing blanks). I suspect this is the book I need but I would like to know what is in it.
(This is all Amazon shows for Table of Contents)…
The Raspberry Pi computer promises to be both popular and significant due to its fantastically low price of GBP22. Trusted Haynes ‘how to’ approach is perfect for beginners. Author comes recommended by the Raspberry Pi Foundation. Starts from first principles and introduces basic programming (coding) skills. Hardware and software utility belts; key tools for using the Raspberry Pi. Interesting full-blown software and hardware projects to try out.

Rats – I was in the office earlier today, but I’ve left my copy there and I’m out doing client visits and press stuff until Wednesday. If you can wait that long, I can add a toc to the comments here – will that be OK?

(Quick edit: I don’t think this book is “perfect for beginners”. It’s damned good for those with only a little knowledge, though.)

Second reply to this: what browser are you using? I’ve just been to have a look with Chrome, and the magnified view of the TOC works fine. You should be able to read it easily; lmk if it’s still a problem!

Using Chrome here also.. still no go HOWEVER I tried it with IE and see the zoomed images just fine. thanks!

Will this be available for download (e.g., Kindle format) well before the hardcover version starts shipping in the U.S. on May 1st? It appears to be available in the UK and if so, does Amazon.co.uk ship to the U.S. for a reasonable cost? Enquiring minds want to know! :D

So, I went through the ordering process at amazon.co.uk and the total cost is $28.88, including shipping and manhandling of about $10. They’re saying it should ship within two days and arrive 8 ~ 10 days later … must be coming by slow boat to China by way of here on the U.S. Best Coast. When is someone going to start sailing catamarans or solar-powered airplanes for express transoceanic/transcontinental shipping, anyway? ;)

I was wondering if any retailers in London would be selling this manual when it’s out? Thank you

Certainly should be in all the big bookshops (and many of the small ones), yes.

@ Jim Manley: I just went through the checkout process (you can login with your Amazon.com credentials) and it showed £11.51 for the book and £6.98 for the shipping (6-10 days) to my address in Kansas, for a total of £18.49. According to current exchange rates that’s $27.80.. Just be careful though, your credit card company may ding you for a conversion fee too if you pay in pounds..

Hey my girl got a mention on Raspberry Pi!!!

My goodness a Haynes manual for a Pi already! They still haven’t got around to making a manual for my Peugeot :( – R-Pi obviously have much influence.

Not only that, I note that some of their recent manuals (including several for different models of H. sapiens) don’t appear to based on a ‘complete stripdown and rebuild.’ How standards have slipped! :)

But still managing to maintain a grip on his glass…..

Have you tried The Book Depository – free worldwide shipping!
http://www.thebookdepository.co.uk

Looks like Eben must be all worn out from filming Crank 3… ;-)

okay i want one of paul clarks cases! love it

Ok, Paul Clark’s entry is maybe nice, but surely unwieldy… Ethernet cable connected from above, HDMI cable also from top side. I think, it’s really imposible to connect these cables and leave the box staying on such a small legs on the shorter side.

My suggestion for Paul’s design would be to flip it where the sd card is the top side and the cables a rear bottom. That might work out a little better. But I still think it looks great.