Zach worked off a model of Raspberry Pi 3 on the Fusion 360 software platform. He 3D-printed large-scale versions of all the components; the print job took over 150 hours and used over 5kg of PLA filament.

Everything was then mounted to a three-quarter inch piece of plywood pretending to be the PCB. Once that had had its corners rounded off with a belt sander and been given a Raspberry Pi green paint job, it was time to add all the other elements.

To make sure everything went in the right place, he taped off the plywood PCB into sections, using paper to lay out scaled-up measurements based on a real Raspberry Pi 3. The 3D-printed USB and HDMI ports were spray-painted to give them a shiny chrome finish. Then he marked out the GPIO pin locations with a drill and hammered in thin sawn-off metal tubes where the pins would be on a real board.

A laser cutter marked out all the lettering on pre-laid strips of tape. Then Zach cut out the letters and used the tape as a stencil to fill them in with white paint.

Once all the arty crafty jobs were complete, it was time to make the giant Raspberry Pi fully functional by routing all the connectors from a real Raspberry Pi to the corresponding 3D-printed parts on the oversized wooden board.

This took a fair few extension cables for USB, ethernet, and HDMI, along with a LOT of soldering.

Zach: we don’t know why you did it, but we’re glad you did.

This isn’t the first enormous Raspberry Pi the world has seen. We’re reminded of the Raspberry Pi Infinity+ that Michael Castor and Christian Moist made for MCM’s booth at the Bay Area Maker Faire back in 2016. And of various giant Raspberry Pi cakes at events down the years: less functional, but more delicious. 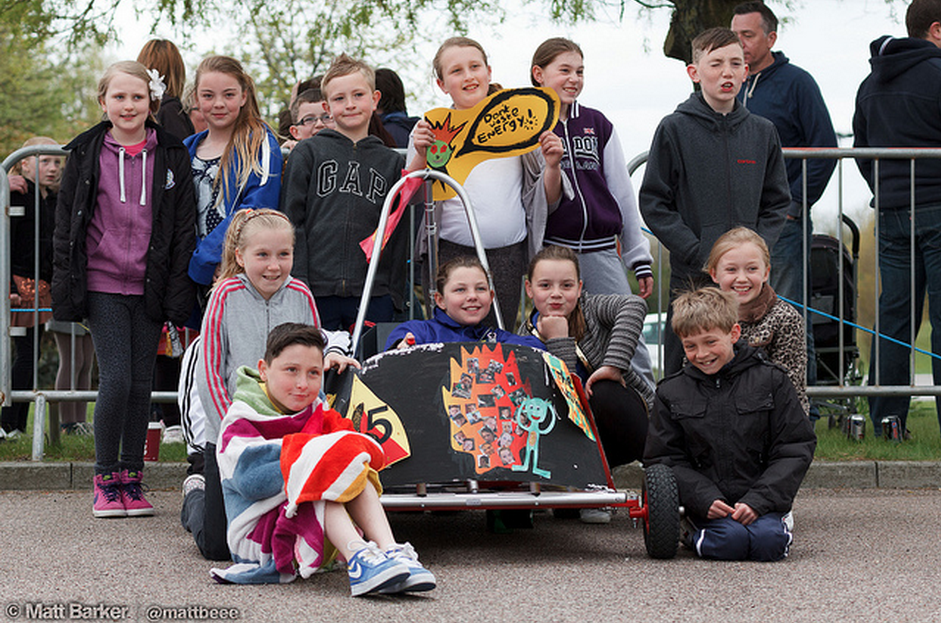 Code an homage to Skate or Die! | Wireframe #58

“ Zach Hipps off of byte sized engineering” is appalling use of the English language. People are from somewhere, not “off of” somewhere.

Colloquialisms are cute though. At least that’s what my Masters tutor told me 🤷‍♀️

I hadn’t read the caption until this was pointed out. “off of” is truly ugly English which shouldn’t be encouraged by RPF or its paid associates as it’s an educational charity.
My MSc tutor would have expected better.
/po-faced
Nice 12x scale RPi though.

Why are you all taking time out of your days to tell someone off about a perfectly acceptable two-word colloquialism? This sort of thing is a matter of stylistic preference; we will carry on exercising our own over here. It’s not as though we don’t enjoy a good nitpick ourselves on occasion, but this is hardly good-natured. It’s mean and egregious, and we’ll be removing any more of it.

The Americanism ‘off of’ is in any case so unnecessary.
Zach Hipps of byte sized engineering.
I took the book off the shelf.
etc. I didn’t need a Masters to master the English language.

None master English as a language. It is, after all, a weapon of psychological warfare.
How else does one explain that every rule has its exception, including the exception rule?

If you’re going to dump on someones work at least have the integrity to include your real name “from somewhere”.

But but but….you’re supposed go shrink….

Hey, nice job. Although, I will surely not buy one!

Do you really think there is a need of 12x for respberry pi. If it can process more than that capacity then the increasing of size is good. By the way Awesome experiment. Big Fan of Rerpbery pi. kudos

Never forget, as one scales up, the heat increases in a non-linear manner.
Scaled up that large, with the same density would result in the most entertaining pool of molten silicon one would ever see. ;)

I thought the whole idea in the computer industry was to make things smaller?

Does it have dodecagigabit ethernet?

Great minds think alike I built one back in 2019 ish.
https://youtu.be/xDQS-CfWirE

I was wondering, where he got the connectors for ethernet and the USB fittings that size? The cables must be very heavy.
I think it was great workmanship and a project that is well done.
Dick.

Go big or go home!
Build a large apartment building, properly scaled up. The power and plumbing would scale nicely into the connectors… ;)

Try fitting this in your pocket! :D

don’t you think he is so curious as not the intel and AMD. But Loved this Giant.