In the last issue of Custom PC magazine, Gareth Halfacree checked out an Amiga fan’s open hardware build: ‘PiStorm’. Let’s see why he thought it stood out from the crowd…

Officially, the Commodore Amiga died in 1996, 11 years after Commodore brought the innovative machines to market with the Amiga 1000. In reality, there are people out there from whom you will never take their Amigas – even if the legal rights surrounding the trademarks, technology, hardware, software and so on are increasingly muddied in the face of competing legal claims.

It’s this band of enthusiasts that’s keeping the Amiga alive with new hardware, typically designed to bridge the gap between classic and modern computing. The most popular of these are accelerators, designed to increase a stock Amiga 1000 or 500 from its aging 7MHz Motorola 68000 to a system that’s a little faster.

PiStorm stands out from the crowd

The PiStorm, designed by Amiga fan Claude Schwarz, is just one of them, but one that stands out from the crowd for a variety of reasons. The first is its open hardware; Schwarz doesn’t sell the PiStorm, but instead publishes the source code and design files for anyone to submit to a PCB fabricator. If you don’t fancy fighting with minimum order quantities, the community around the PiStorm organises semi-regular group buys, in which an assembled board, requiring only the headers to be soldered in place, can cost as little as $13 US (around £9 ex VAT).

In a market where your average Amiga accelerator costs 5-15 times as much money, an accelerator for that little would be remarkable, but the PiStorm is far from a simple accelerator. The board itself is simple, driven by an Intel Altera MAX II complex programmable logic device (CPLD) – akin to a field-programmable gate array (FPGA), but simpler and cheaper.

The CPLD acts as ‘glue logic’ between the host Amiga and a Raspberry Pi single-board computer in an unusual fashion. Connected via the Raspberry Pi’s 40-pin general-purpose input/output (GPIO) header, the PiStorm allows the Amiga to treat the Raspberry Pi as a replacement processor and more.

Installation is simple – remove the processor from your Amiga 1000, 500 or 500 Plus, and push the PiStorm into its place. Add the Raspberry Pi on top, with a micro-SD card loaded with the lightweight Linux distribution of your choice, and you’re done.

The software side is a little trickier. PiStorm is a constantly evolving project, and there’s no ready-to-run software image. The documentation walks you through downloading and compiling the software, updating the CPLD and finally loading the Muhashi emulator. It’s here that the PiStorm cuts its costs – rather than having a real processor or an FPGA loaded with a soft core, the PiStorm connects the Amiga to a software emulator.

This unusual blend of real and emulated hardware unlocks additional features too. By default, the PiStorm is configured to act as a Motorola 68020 and a 128MB chip memory expansion. Tweak the configuration and you can increase that to a Motorola 68040 – albeit with a few compatibility issues that are still being worked on – with 8MB of additional Zorro II memory – just about the most you could ever fit in a classic Amiga.

Handling the CPU and RAM is just the beginning though. The PiStorm’s keyboard and mouse pass-through also allow you to connect USB peripherals to the Raspberry Pi and have them control the Amiga. Meanwhile, a network pass-through, which will allow the Amiga to use the Raspberry Pi’s Wi-Fi connection, is on the road map.

The PiStorm can also turn hard drive images, or physical block devices, into SCSI Amiga drives, making it easy to expand your Amiga’s storage. The board acts as a real-time clock as well, setting the Amiga’s clock to the Raspberry Pi’s clock – which is, in turn, set automatically over the network via NTP.

The board isn’t finished there either. The PiStorm can also emulate a retargetable graphics (RTG) card, a common form of add-in card that gives an Amiga high-resolution and high-colour-depth capabilities. Better still, when configured as an RTG – a task that requires adjusting the configuration on both the Raspberry Pi and the Amiga itself – the video is output from the Raspberry Pi’s HDMI port, making it easy to connect your Amiga to modern monitors and TVs.

In short, the PiStorm is remarkable. It’s not perfect – the ability to boot from physical Kickstart ROMs didn’t work during testing, for example, with the PiStorm failing unless a ROM dump file was provided, and when the Amiga is powered off, the Raspberry Pi loses power without shutting down safely. Also, among other compatibility issues, it’s currently limited to the Raspberry Pi 3 Model A+, with Raspberry Pi 4 and Compute Module 4 support in progress, but for the money there’s still nothing else like it.

More information on the PiStorm is available from custompc.co.uk/PiStorm, where you’ll also find a readme file containing a link to the Discord channel where group buys are organised.

Read the latest issue of Custom PC for free!

You can read more features like this one in Custom PC magazine, available directly from Raspberry Pi Press.

And if you’d like a handy digital version of the magazine, you can also download the latest issue for free in PDF format. 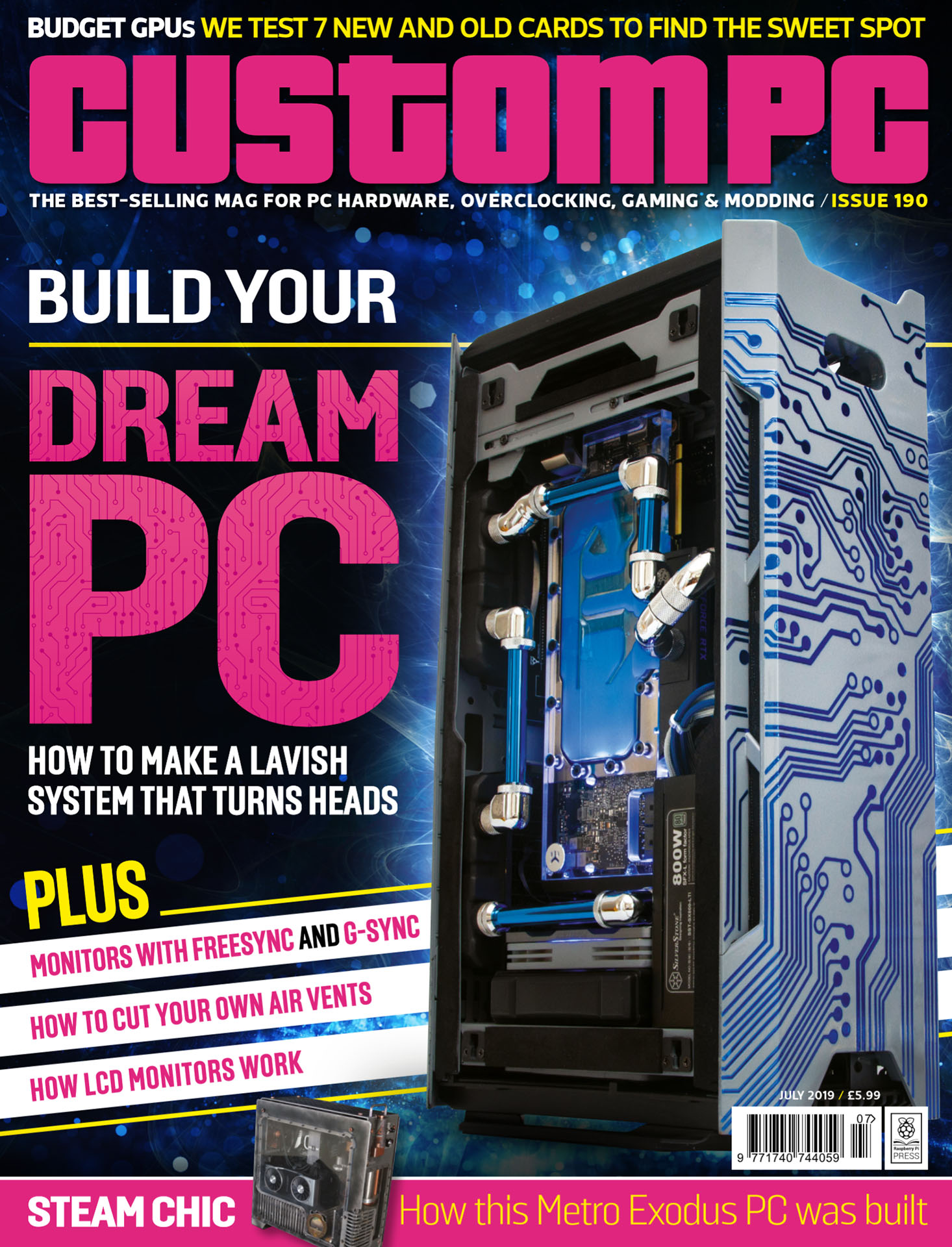 Get the new-look Custom PC magazine for free!

How pillars and triangles can focus your game design

Unfortunately that $13 pricepoint is waaaaay off the mark. Even at the cheapest it ever was in a group buy situation, the lowest it got was £11, and that was before chip-a-geddon started to hit the prices. since now it’s impossible to get the cheap assembly hoses to make it at that price anymore (since they don’t have stock of the main CPLD part) hand assembly of the final part is the only way forward, and sourcing the CPLD is usually more expensive than it was when the assembly service did it (JLC PCB assembly) typically the lowest group buys can manage is closer to £/$/€25 and slow as heck due to hand assembly of 100-pin surface mount parts…
Maybe when chip-pocalypse ends we can get back to $15 per device but that’s looking a long way off.

further corrections:
“By default, the PiStorm is configured to act as a Motorola 68020 and a 128MB chip memory expansion”
PiStorm CANNOT increase the amount of CHIP RAM. the 128MB is FAST RAM.
Also for those that are worried about unsafe shutdowns (really not as much of a problem with PiStorm as people like to make out) there is a workbench program that is on a tiny hard disk image mounted by default that lets you shutdown the pi from within the amiga. kinda like the old “park” command you had to do before powering off an OG HDD back in the day.
Also on the horizon is a legacy video passthrough so the OG denise modes can be piped into the Pi’s camera port and be merged with the RTG to HDMI out. 1 Cable baby!

Between this and the Pimiga, retro amiga computing is on fire.

In the process of setting up my PiStorm…. There is a major flaw in this article. Original Amiga’s, were never able to have more than 2mb of ChipRam. It all depends on what Fat Agnus that are in the machine. Early Fat Agnus, were only able to adress 512k, then came the 1mb Fat Agnus and the last ones, were able to handle up to 2mb of ChipRam. Then there are FastRam, that the PiStorm delivers and last but not least, you could give the Amiga some pseudo ram. Also called ranger Ram or SlowRam if you like. That was typically what people upgraded their A500 with. 512k ChipRam + 512 SlowRam.

Hi, I am looking a motherboard for my laptop ‘ Hp tree HQ model’ DD3.

What’s the possibility of getting something like this to work with other 68k systems, like maybe a Mac SE..?