It’s #MagPiMonday so we are sharing one of our favourite articles from the latest issue of the official Raspberry Pi magazine. Rob Zwetsloot shows us how wearable tech is now better than ever with Raspberry Pi Pico.

These glasses not only use electronics and Pico to power them, they’re also 3D-printed as well, making them the most hackable wearable glasses. The maker, Kevin McAleer, likes to use them to add some extra light to anything he’s soldering. As the ring is mounted on a servo, it can move out of the way when it’s not needed.

Each side has a servo attached and you could add whatever you want to either side – Kevin has thought about a fan to blow away soldering fumes, and we reckon a magnifying glass could also be cool.

It’s impossible to miss Sean O’Steen when he’s wearing his very colourful beret – in fact, that’s the point of it! At its most basic, this beret has LEDs around the brim powered by a Pico W running through a series of preprogrammed animations for the individual lights. However, it’s also network-enabled, allowing you to connect to it with your phone.

Sean uses Pico W’s networking functionality to use the beret as a signalling system, letting people nearby know in a busy convention hall if he’s going to turn right or left, or even just stop.

When sewing electronics into a costume, you can make use of conductive thread to connect electronics to Pico, or other controller, much more discreetly. They’re safe to wear and can be sometimes easier to connect than some wires – depending on the project.

You can grab some at Pimoroni here: magpi.cc/conductthread.

A classic wearable project updated for Pico. This Pip-Boy 2040 project was made by our friends at Adafruit and uses a Feather RP2040, a variant of Pico that is much smaller but still includes a full screen and usable buttons.

The code for this is a simple slide show; however, it is very easy to add more interactive screen modes by tweaking it in Python. The most difficult part is building the physical thing, and this tutorial has you well-covered there.

Badger 2040 is a great little screen that easily works as a badge once connected to clothing – we’ve used it at cons ourselves in the past. It uses an e-ink display, so it doesn’t need to be constantly connected to power to display your name, but you’ll need to quickly plug it in to change to another preprogrammed screen.

This is not the first time we’ve seen a wearable giant Game Boy powered by Raspberry Pi, and we doubt it will be the last because it is a very fun build. You could even turn yourself into a Game Gear or a Super Nintendo with an almost identical build. 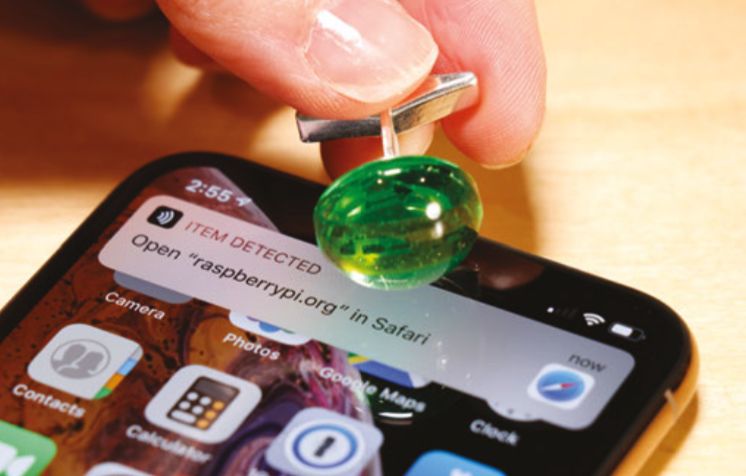 Make your own NFC data cufflinks

Did I close the garage door? Let Raspberry Pi check for you