Have you ever fancied building a Raspberry Pi photo booth? How about one with Snapchat-esque overlay filters? What if it tweeted your images to its own Twitter account for all to see?

“Well, the thing I really want to say (if you haven’t already) is that this whole thing was a team build”, explains one of the resource creators, Laura Sach. “I think it would be a brilliant project to do as a team!” The resource originally came to life at Pycon, where the team demonstrated the use of filters alongside the Camera Module in their hands-on workshops. From there, the project grew into The All-Seeing Pi, which premiered at the Bett stand earlier this year.

Build your own photo booth

To build your own, you’ll need:

If you’re feeling artistic, you can also use a box to build a body for your All-Seeing Pi.

By following the worksheets within the resource, you’ll learn how to set up the Camera Module, connect buttons and a display, control GPIO pins and the camera with Python code, and how to tweet a photo. We publish our resources under a Creative Commons license, allowing you to use them for free at home, in clubs, and in schools. The All-Seeing Pi resource has been written to cover elements from the Raspberry Pi Digital Curriculum. You can find more information on the curriculum here. 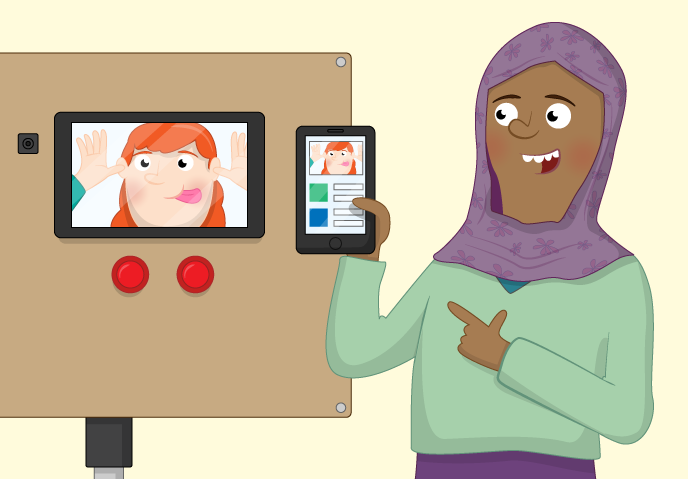 10 years ago, I was involved in a photo booth project for a whiskey brand. We nicknamed it the Tardis – a bespoke kiosk on castors that could be transported to airports across Europe. It had a large touchscreen, PC and Panasonic photo printer, and a webcam.

The idea was to submit a picture, add various branded filters to it, and submit it for a competition. This was all done with PHP, Flash, and ImageMagick to prepare the picture and then print it out for you to keep.

Needless to say, the kiosk wasn’t well built to deal with airside baggage handling, and broke after two airports, and the project was shelved.

It’s marvellous to think that the Pi makes this kind of project so much easier (and cheaper) to achieve. What a brilliant project.

What a great idea for events! – I am soooooo trying this :-)

This is an excellent project. I already have a few pupils wanting to build and adapt their own versions!

Does it have an option to not create vertically flipped mirror images?

This is cool! I’ll try to figure out how to incorporate this in my photo booth business

Hi, after finishing the original resources file for this project, i noticed the “what’s next” part, and i was wondering if anyone knows or tried to do points 1 and 2

Can you add a text box or perhaps a touchscreen keyboard to your GUI to allow someone to enter their Twitter handle?

truly appreciate if u can explain the concept of how to achieve them, any code that might help with this matter is also recommended

i like to see this with OpenCV so that the system detect’s automaticly the faces to drop the filters on the heads ;)