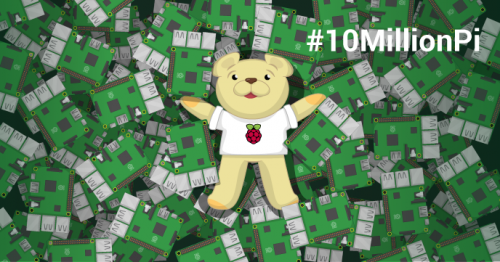 It’s party central at Pi Towers… and for good reason. Thursday saw the announcement of an incredible 10 million Raspberry Pis sold in four and a half years. Can you believe it?

In honour of this amazing achievement, the CEOs, trustees and staff, plus several members of the Pi community, visited the Houses of Parliament, thanks to the Rt Hon Matt Hancock MP and Mims Davies MP.

Follow the tag #10MillionPi across social media platforms to see more from the day.

And if that’s not enough, Eben also announced the launch of our brand new Raspberry Pi Starter Kit, Russell Barnes introduced us to the newly translated German MagPi Magazine, AND next Friday sees the start of PyCon UK… phew!

So have a wonderful week, feel free to tag #10MillionPi to share your own Raspberry Pi stories, and I’ll see you next Friday.